Why would EU make assurances given to UK on withdrawal agreement legally binding?

Europe Letter: Latest bid to break backstop deadlock amounts to a storm in a teacup 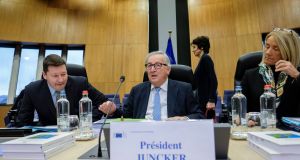 We are in clutching-at-straws mode here, with barely 50 days to go to a “hard” British departure.

And so on Monday, when there was a hint that the European Commission was coming up with a new idea – however thin – to break the backstop deadlock, it was pored over by the British press in forensic detail. In truth a storm in a teacup.

Had commission secretary general Martin Selmayr, president Jean-Claude Juncker’s right-hand man, really suggested that it might be willing to add to the withdrawal agreement the assurances given to the UK by Juncker and European Council president Donald Tusk, to give them legally binding force?

Well, not exactly. In fact, not at all, according to Selmayr, after MPs from the Commons cross-party Brexit select committee suggested as much following a long meeting with him.

At issue was whether the idea, which was certainly discussed, emanated from Selmayr or from the MPs. If the former, was he really suggesting that the commission, contrary to its repeated insistence, would be prepared to “reopen” the 585-page withdrawal agreement to include what has been described variously as an additional “codicil” or protocol?

“The Juncker and Tusk letter would in essence be copied and pasted into a protocol and shoved into the withdrawal agreement,” MP Stephen Kinnock told journalists. “It is definitely [a case of] reopening to quickly slip something in and close it very quickly.

“I would term it unzipping,” he explained somewhat indelicately.

Responding to press reports of the meeting, Selmayr tweeted a non-denial denial saying: “On the EU side, nobody is considering this.”

He added: “Asked whether any assurance would help to get the withdrawal agreement through the Commons, the answers of MPs were ... inconclusive...”

What Selmayr did make clear to the group, having emphasised that he, no more than they, was not a negotiator, was that the EU was unlikely to concede anything new without cast-iron guarantees from the UK that would swing the Commons behind them.

Any premature offer, Brussels knows, could simply be pocketed by Brexiteers with an endless series of demands for yet more. We are not going there.

Kinnock reported that “Selmayr’s question to the Brexiteers was: If we did that, would you vote it through? And they weren’t able to answer that question.”

Tory Brexiteer MP Stephen Crabb acknowledged the secretary general was concerned that adding the legally-binding assurance would be worthless if offered to MPs.

Crabb told the Express: “We talked around the idea of the Tusk letter being written into some sort of legal protocol but everytime someone asked him if it is something he could do, he said first of all it’s not me negotiating and secondly let me turn around the question – if we were to do that would you be guaranteed to vote for the deal?”

A commission spokeswoman on Tuesday described the account as the most accurate report of the meeting – probably the first time the Eurosceptic paper had ever been praised by the commission.

In truth few believe that these assurances, even in legally-binding form, could provide Theresa May with anything like the swing votes for her deal that she needs. If this is indeed what she will be seeking in her visit here on Thursday.

The Juncker and Tusk letter of assurance was sent to the British prime minister last month to help clarify the EU understanding of the backstop, and specifically to respond to demands for a time limit or unilateral exit mechanism from it. But it made clear that the EU is not in a position to resile from or in any way undermine the obligations set out in the withdrawal agreement, specifically its Northern Ireland protocol.

‘Facilitate the next steps’

“As you know,” the letter says, “we are not in a position to agree to anything that changes or is inconsistent with the withdrawal agreement, but against this background, and in order to facilitate the next steps of the process, we are happy to confirm, on behalf of the two EU institutions we represent, our understanding . . . ”

That understanding involves a joint view of the backstop as a malign necessity which can only be temporary “unless and until” it is replaced by an agreement on a future relationship which provides the sort of guarantees necessary to safeguard a frictionless border.

The commission commits to entering negotiations and proceeding with them as expeditiously as possible with a view to ensuring that when the extendable transition period of two years comes to an end it will not be necessary to trigger the backstop.

Why anyone should believe that a reiteration of that kind of assurance, whether or not in legally binding form, would help build a May majority is not clear. As Martin Selmayr appears to have pointed out.