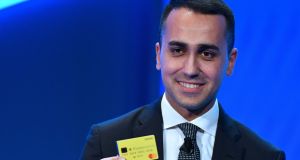 Luigi Di Maio, the Italian deputy prime minister and leader of the anti-establishment Five Star Movement (M5S), has met a senior figure from the gilets jaunes (yellow vests) movement – a meeting likely to increase tensions between Italy and France.

Mr Di Maio and Alessandro Di Battista, a prominent M5S member, met Christophe Chalençon, as well as candidates that the protest movement has put forward for the European elections in May, on the outskirts of Paris on Tuesday. Posting a photograph of the group on Facebook, Mr Di Maio described it as a “beautiful” meeting.

Mr Di Maio had previously expressed his admiration for the gilets jaunes, who have been holding at-times violent anti-government protests each week across France for the past few months. He urged the movement not to “give up” and said the demonstrations reminded him of the spirit that gave birth to the Five Star Movement in 2009.

On Tuesday he said the two groups shared “many common positions and values that focus on the battles for citizens, social rights, direct democracy and the environment”.

Mr Chalençon said that while the two sides “practically agree on everything”, there was no talk yet about whether they would form an alliance for the elections to the European Parliament. Italian media reported that Ingrid Levavasseur, who heads the gilets jaunes’ list of 10 candidates for the elections, will meet M5S officials again in Rome next week.

The meeting follows a series of verbal attacks from Mr Di Maio and his co-deputy prime minister, Matteo Salvini, on the French president, Emmanuel Macron, in recent weeks and is also seen as an additional tactic by M5S to regain some of the popularity lost to Mr Salvini’s far-right League since the coalition government came to power last June.

“M5S is weak right now,” said Massimiliano Panarari, a politics professor at Luiss University in Rome. “They are losing traction in their traditionally antagonistic contingencies and they need to find every antagonistic issue to demonstrate that they are strong. Macron is also the perfect target for populist movements.”

Mr Panarari added that the meeting with the gilets jaunes was also a way to tell Italian voters that the Five Star Movement still has its “anti-establishment soul” as well as to attract similar groups with whom they might be able to build a coalition after the EU elections.

M5S launched its European election campaign in January, with Mr Di Maio and Mr Di Battista travelling to the European Parliament in Strasbourg and denouncing the institution as a “waste of money”. At the time, Mr Di Maio said he was preparing an election manifesto with other European populist groups.

Opinion polls in France have suggested that the main impact of one or more gilets jaunes candidates standing in the European elections would be to reduce support for the far-right of Marine Le Pen and the far left, led by Jean-Luc Mélenchon.

A survey last month by Elabé showed 13 per cent of voters could vote for a gilets jaunes party, knocking three points off the score of Ms Le Pen’s National Rally and 1.5 points off that of Mr Mélenchon’s France Unbowed, and extending the lead of Mr Macron’s La République En Marche.

“A gilets jaunes party would likely mobilise people who do not usually vote, but also take votes from the National Rally and France Unbowed,” Emmanuel Rivière of pollsters Kantar Public France told Le Monde. “Paradoxically, the principal beneficiary would be the party of the president.”

An Ifop opinion poll published on Wednesday showed Macron’s approval rating surging from 23 per cent in December to 34 per cent in February. – Guardian