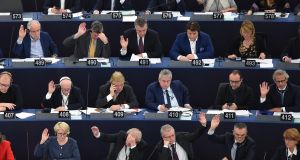 Members of the European Parliament: it is a genuine co-legislator in many areas of EU policy and budgeting. Photograph: Frederick Florin/AFP

The turn of the new year has ushered in the EU’s election season. In five months, voters across the union will cast ballots in a European Parliament vote that is an important test of the ability of the EU’s mainstream political families to resist the tide of populism that has swept the continent.

The vote will also determine in a real sense how governable the EU is – the parliament is now a genuine co-legislator in many areas of EU policy and budgeting. Unless a working majority from across the mainstream parties – supporters of European integration – is sustained, there is a real danger that populists and Eurosceptics can bring about legislative gridlock.

When it comes to substantive decisions, the parliament has never had consolidated coalitions with high levels of party discipline. MEPs join ad hoc alliances on different issues according to party, national and personal preferences. But on running the parliament’s business and the sharing of influential roles, the European People’s Party (EPP) and Social Democrats have always called the shots. Their task is set to become yet more difficult.

A total of 751 MEPs currently represent some 500 million people from 28 member states. Following the UK withdrawal that number will fall to 701 in May’s elections.

The new majority is 353, and aggregates of polls on Politico, as of January, suggest that the combined votes of the parliament’s three main parties – the centre-right EPP, the left Socialists and Democrats (S&D), and the Liberals (ALDE) – are likely, if the election were held now, to total only an uncomfortable majority with some 370 seats.

The EPP is expected, on these figures, to lose some 32 seats and the S&D 46 (in an admittedly reduced chamber).

The balance would be made up of hard left, a block of well over 100 hard-right/populist Eurosceptics, with a sprinkling of out-and-out fascists and miscellaneous Greens and others including a new block of some 19 currently unattached Macronites from France (En Marche).

The historic predominance of the EPP and S&D in the parliament is on the wane although both remain the top vote-getters in Europe – in 13 member states, the EPP tops the polls. In France, Italy, Hungary and Poland, however, the top positions are taken by the populists – in France (79 seats), the new version of the Front National (National Rally) is outpolling Macron and likely to take 22 seats.

In Italy (76 seats), the Liga of Matteo Salvini looks likely to take 27 seats against its rival populist Five Star Movement’s 23. In Hungary, Viktor Orban’s Fidesz – a cuckoo in the nest of the EPP – may win an overall majority while Poland’s Law and Justice looks set to take some 24 of 52 seats.

Perhaps the biggest casualty of the recent political turmoil is the one-time colossus of European social democracy. Today, the only EU country with an outright socialist government is Malta, in addition to minority, coalition or caretaker governments in Spain, Romania, Portugal and Sweden. The party is on track to win only 142 seats on the back of just 20 per cent of the EU-wide vote.

Epitomising the challenge, its candidate for the presidency of the European Commission – spitzenkandidat – Frans Timmermans, the Dutch commissioner, represents a party that is expected to win no more than three seats.

Manfred Weber, the EPP’s Bavarian nominee, is expected to emerge comfortably at the head of the parliament’s largest group, but EU leaders who do not like having their choice foisted upon them by MEPs may be disinclined automatically to accept his nomination .

The European Conservatives and Reformists (ECR) candidate, Czech Jan Zahradil, has little chance of winning. A major obstacle to Zahradil’s plans will be the loss of the ECR’s biggest national delegation – 18 UK Conservatives. The ECR is expected to take some 51 seats.

The spitzenkandidat system, under which the candidate from the party with the largest vote is nominated to EU leaders as MEPs’ choice for commission president, is an attempt by MEPs both to exercise power in the formation of the commission, and to persuade voters that they should see the elections as about the European-level exercise of power.

These elections tend to be seen – and probably will again be seen – as what political scientists call “second order” elections, where voters use their ballots to pass judgment not on European political developments but on their own governments. Voter turnout has declined from 62 per cent in the first elections in 1979 to 42.6 per cent in 2014.

But party politics has been undergoing a revolution at national level, a revolution that will reach Brussels and Strasbourg in 2019.