Year in Review: The Mediterranean retained its place as the deadliest migration route in the world 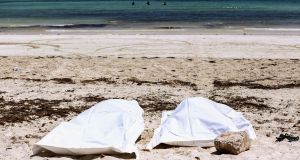 Recovered bodies on the beach of Aghir in Tunisia’s southern island of Djerba from a boat carrying 86 migrants that capsized off the Tunisian coast while crossing the Mediterranean from Libya to Italy in July. Photograph: Anis Mili/AFP via Getty Images

In August this year, bodies began washing up on a beach in Khoms, Libya. They lay on the sand, contorted and unmourned, as refugees locked in a detention centre metres away begged armed guards to let them outside to bury them. That request was rejected.

The bodies belonged to victims of what is believed to be the year’s biggest shipwreck – around 150 people are thought to have died. But it was one tragedy of many, and it was quickly forgotten by everyone except the families and friends of those who perished, some of whom will never have confirmation that their loved ones were on board the unlucky boat.

The Mediterranean Sea retained its place as the deadliest migration route in the world this year: at least 1,235 people drowned or disappeared trying to reach European shores, though it’s impossible to know the exact death toll.

Despite this, the European Union pulled its naval assets out of the Mediterranean in March, with a spokesperson for the EU’s foreign policy chief, Federica Mogherini, saying “it is clear that without naval assets the operation will not be able to effectively implement its mandate, but the decision has been taken by the member states”.

Instead, the EU continued – for the third year running – to support the Libyan coastguard with tens of millions of euro, encouraging a body that comprises former smugglers to intercept boats and bring tens of thousands of men, women, and children back to Libya. There, most are placed in indefinite detention, without charge or trial.

In private, some European politicians say the EU’s hardening migration policy is a response to growing populism – a desperate bid to stop far-right parties from gaining more ground across the continent. And Europe is fragmenting. Its countries are erecting hard borders at a rate not seen since the Berlin wall. A report this year by think-tank the Transnational Institute found 10 out of 28 EU member states have now built walls to prevent immigration.

Meanwhile, while it’s not true that all Africans want to come to Europe, with growing inequality in many African countries, climate change affecting greater numbers of people, and the continent’s population expected to double by 2050, migration will continue to be a major issue. This is not counting the many Africans fleeing wars or brutal dictatorships, and simply looking for a place they can feel safe.

Though EU spokespeople argue that they’re successfully disrupting smuggling routes, it’s certain that – in decades to come – historians will look back on the way Europe is treating refugees and migrants with fascinated horror.

In June, a submission to the International Criminal Court by former ICC employee Juan Branco and Israeli lawyer Omer Shatz called for the EU and its member states to be prosecuted for “crimes against humanity”.

The 245-page document said the EU was responsible for “causing the death of thousands of human beings per year, the refoulement [forcible return] of tens of thousands migrants attempting to flee Libya and the subsequent commission of murder, deportation, imprisonment, enslavement, torture, rape, persecution and other inhuman acts against them”.

Meanwhile, independent search-and-rescue operations in the Mediterranean have increasingly been criminalised. In June 2019, Carola Rackete, the captain of rescue ship the Sea-Watch 3, risked up to 15 years in prison to bring 42 refugees and migrants to shore in Italy. She said she had no choice after more than two weeks waiting for permission to dock, during which time the situation on board became increasingly desperate.

Afterwards, Rackete was uncomfortable with the attention she got. “I have white skin, I was born in a rich country, I have the right passport, I was allowed to attend three universities, and I graduated at the age of 23,” she said. “I feel a moral obligation to help those people who did not have the foundations that I did.”

Europeans on land have also been prosecuted for helping migrants. In May, the website Open Democracy compiled a list of more than 250 people across 14 European countries who have been charged, arrested, or investigated for actions supporting refugees and migrants over the past five years. The list included pensioners, journalists, a pastor and a firefighter, who had given food, money or lifts to migrants already in Europe, or documented police violence against them.

In September, Italy’s far-right interior minister and deputy prime minister Matteo Salvini lost control of government after a gamble to gain more power failed. Salvini had closed ports to rescue ships, and his ousting was heralded as good news by refugee advocates. But Salvini retains a lot of popularity, and his attitudes are shared by other politicians.

Weeks later, on October 24th, the European Parliament erupted in applause after a non-binding resolution that would have condemned the treatment of refugees in Libyan detention centres and expanded EU search-and-rescue operations in the Mediterranean failed by just two votes. In Ireland, the vote got particular attention because four Fine Gael MEPs voted against it.

Since war broke out in Libya in April 2019, between renegade eastern general Khalifa Haftar and militias associated with the UN-supported, Tripoli-based Government of National Accord, the situation for refugees has become even more precarious. Some of those returned from the sea have been recruited directly from detention centres to help with the war effort. They are in danger both on the front lines, and in the facilities they were being held in, which often double as military bases.

In July, at least 53 refugees and migrants died when an air strike hit a migrant detention centre in Tajoura, eastern Tripoli. Some 23 more died slowly in the months before that, abandoned without medical care in Zintan, a detention centre in the Nafusa Mountains that is referred to as “Guantánamo” by refugees in Libya.

Their voices are barely registering, and the EU isn’t counting their deaths.

1 At least eight shot dead in German town of Hanau
2 A Russian cruiser with ‘cannibal rats’: What other ‘ghost ships’ could be out there?
3 DUP pleads with UK to reduce salary threshold for migrant workers coming to North
4 Martin tells party government may not be formed until April
5 Person claiming to represent ‘ghost ship’ owner comes forward
Real news has value SUBSCRIBE