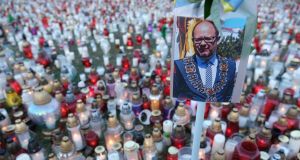 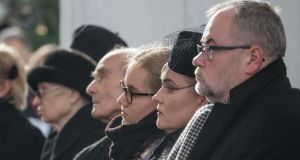 Family of the late Gdansk mayor Pawel Adamowicz: his parents, his daughters Teresa and Antonina, his wife Magdalena and his brother Piotr Adamowicz attend his funeral. Photograph: Wojtek Radwanski/AFP

Like a caged animal, Piotr Adamowicz paces the floor. We’re in a windowless room in Gdansk city hall where, for 20 years until last month, his younger brother Pawel served as mayor.

Last month, the 53 year old was onstage at a charity concert when he was stabbed several times by a knife-wielding man.

He died the next day from his injuries, leaving behind a wife and two daughters, his 91-year-old parents – and Piotr.

On Wednesday evening, a month after a knife attack that shocked Poland, a spotlight will shine heavenward for the late mayor over Gdansk, birthplace in 1980 of the Solidarity movement that began the end of Europe’s communist era.

Pawel Adamowicz was one of the idealistic young activists in the Baltic city, alongside Donald Tusk.

But locals here fear they will never have closure on their mayor’s tragic end. The 27-year-old, knife-wielding local man has a history of mental illness and may never be charged. And many Adamowicz supporters insist the man was radicalised by years of hate speech directed at the liberal mayor: from internet trolls to a campaign led by state propaganda broadcaster TVP.

It accused him, at various times, of tax evasion, promoting nazism and communism, supporting criminals and mafia and being responsible for ecological destruction.

The liberal mayor became a hate figure for conservatives and the far right in Poland’s polarised, emotive culture war. But few expected he would become the conflict’s first fatality, even after a far-right group declared Adamowicz a “liberal traitor” last year and issued him and 10 other mayors with a “political death certificate”.

No one was charged and the late mayor’s brother is clearly still too shocked to even consider mourning, let alone assign blame. But he warns of false equivalence between the attacker and those behind the hate campaign.

“It is a difficult question, who or what was responsible,” he says, grey hair and beard framing wounded eyes. “Undoubtedly my brother was a target of a campaign organised by public media . . . all of that was simply disgusting.”

As well as facing continuous threats, his brother was very worried about being spied on, under sweeping new intelligence legislation.

“We are back to communist times, he feared being bugged everywhere,” says Adamowicz, adding that his brother preferred writing important things down rather than discussing them on the phone. “It may seem ridiculous to you but that is the reality in Poland.”

Between jerky sips of water, Adamowicz relates in shattering detail what happened after he heard by phone of the attack. His race to hospital where doctors cut off his brother’s clothes in the operating theatre. They sewed up his heart and diaphragm but struggled to stop the bleeding.

“Doctors were pumping blood into him but it was pouring out again,” says Adamowicz in a flat voice.

Police were posted to the hospital doors after a tip-off that tabloid journalists were trying to buy doctors’ white coats and slip in.

Lost in detail, Adamowicz’s fingers drum on the table. His brother’s wife was in California with their children at the time of the attack, and didn’t make it home in time.

The older brother summoned his elderly parents for a quiet goodbye and Pawel Adamowicz died at 2.03pm on January 14th.

His ashes are now interred in a tomb of honour in the massive red-brick gothic wonder that is St Mary’s Basilica. Last Sunday evening after Mass, a small group of locals gathered at the tomb in silent prayer until the church lights were turned off.

Over at Gdansk’s modern city hall, pictures of the murdered mayor are taped to the entrance while, upstairs, his staff struggle to keep working.

Long-time adviser and spokesman Antoni Pawlak is a bearish man with a whistling smoker’s cough and shadows under his eyes that look like he’s been punched in the face – twice. Not even he, a pessimist by nature, saw this coming. Nor does he believe his friend’s violent death will shock Poles into abandoning their polarised politics.

“Even after the death of Pope John Paul, we ran out of solidarity with each other after two or three days,” he adds.

Pawlak believes powerful Catholic bishops allied to the government have a case to answer for backing the vilification of the liberal mayor who was also a practising Catholic.

The mayor’s push-back against PiS, and a campaign to make his city more open and tolerant, saw him branded “anti-Polish” by TVP, the ruling party – and many pulpits.

“Pawel wanted more equality for all in Gdansk – LGBT people and immigrants – and the paradox is this is why the church hated him,” says Pawlak. “His policies weren’t those of a leftist, but of a serious Christian.”

On Wednesday evening, the late mayor’s older brother says he will struggle through the month’s anniversary ceremony.

At a concert on Sunday evening, he began to tremble during A Prayer at Sunrise, a Polish anthem from the anti-communist struggle:

“I will accept Your every severe judgment, I will bow before Your power/but save me, Lord, from contempt, spare me from hatred.”

Does Piotr Adamowicz have any regrets?

In a dull voice he recalls his brother calling one Saturday a year ago to say he wanted to step down as mayor.

Through a mutual friend, Piotr encouraged him to stay on and he was re-elected mayor last October. In the windowless room of his late brother’s former workplace, Piotr recites from memory one election night message he will never forget: “Congratulations thieves and liars, we will watch your hands constantly and all the things you do.”