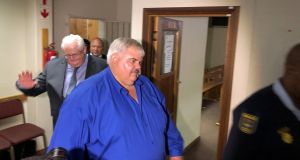 The whistleblower who gave damning evidence to an inquiry in South Africa, implicating top ruling party officials in serious wrongdoing, has been charged with corruption.

Police confirmed on Wednesday that Angelo Agrizzi, the former chief operating officer at facilities management company Bosasa, was one of four people arrested and charged with corruption, money laundering and fraud in the prison services sector.

Last month Mr Agrizzi gave explosive evidence to an inquiry into public sector corruption that detailed how, over nearly 20 years, he and other Bosasa staff members repeatedly bribed officials in return for government tenders worth hundreds of millions of euro.

Three of the four accused appeared in Pretoria’s specialised commercial crimes court on Wednesday, where they were granted bail of 20,000 rand (€1,300) each before the case was adjourned to March 27th next for further investigation. Mr Mti was arrested and charged in the Eastern Cape province and is scheduled to appear with his co-accused in Pretoria at the next court date.

In addition, Bosasa and two of its subsidiaries – Sondolo IT and Phezulu Fencing – were charged with corruption. A fifth individual, who is currently overseas, has been informed that a warrant of arrest has been issued for him.

“The sweeping, high-profile arrests follow a marathon investigation wherein almost 1.6 billion rand is said to have been misappropriated in the tender processes for the procurement of various services by the department of correctional services,” Mr Mulaudzi said.

“The tenders were awarded to Bosasa Operations Ltd and its affiliated or subsidiary companies,” he added. Bosasa is now called African Global Operations.

The move by the police has come shortly after the ruling African National Congress changed its position in relation to giving members of the movement accused of corruption the benefit of the doubt until a court rules against them.

The ANC’s head of the presidency, Zizi Kodwa, said on Monday the party was now calling on law enforcement agencies to act if overwhelming evidence of wrongdoing emerged from any of the three commissions of inquiry currently taking place.

Since the Commission of Inquiry into State Capture, Corruption and Fraud in the Public Sector started last August, more than a dozen top ANC officials have been implicated in corruption linked to Bosasa or the controversial Gupta business family.

However, none of these individuals, nor Bosasa chief executive Gavin Watson, have been arrested in relation to the allegations made against them at the inquiry, as these investigations are ongoing.

According to police, this week’s arrests stem from a 2009 investigation into Bosasa conducted by the Special Investigating Unit (SIU), an independent statutory body accountable to parliament, that directly implicated those who were charged.