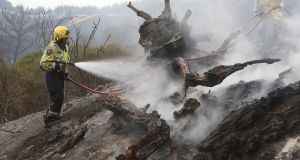 Firefighters battle after a blaze forced the evacuation of residents of 170 homes in the Tasman district on Wednesday. Photograph: Evan Barnes/Getty Images

A huge bushfire that has been raging in the parched New Zealand countryside for four days has forced hundreds of residents to be evacuated from their homes and prompted fears that climate change has caused the nation to become “more flammable”.

Firefighters have been working for most of the week to put out fires covering more than 2,000 hectares (5,000 acres) around Nelson on the northern tip of the South Island of New Zealand.

On Friday an estimated 700 people were evacuated from the town of Wakefield as fire chiefs warned that a northerly wind could force the original blaze, which began on Tuesday, back toward residential areas.

Others in the town of 3,000 have been warned to prepare to evacuate or to leave themselves. Those forced to leave their homes were asked to report to a nearby stadium if they needed emergency accommodation and instructed by local authorities to take water, food, medicines, pets and valuables with them.

Other, smaller fires were also flaring up in the region, including in the city of Nelson, which is home to about 50,000 people. Local firefighting services have deployed helicopters and trucks to fight the fire.

By Friday one home had been lost, but so far no deaths had been reported. The fire was most likely to have been caused by a spark from agricultural machinery, according to authorities.

Prime minister Jacinda Ardern visited Nelson on Thursday to meet with fire and civil defence teams. She called the fire “pretty devastating” and praised firefighters and volunteers for their work, as well as pledging additional funding toward the mayoral relief fund.

People are prepared for earthquakes and tsunamis and volcanic activity, but I don’t think most people would have thought about fire

Bushfires are relatively uncommon in New Zealand, but this is the second significant blaze in two years and follows a heatwave that pushing temperatures in some parts of the country to 30 degrees.

In February 2017, fires in Christchurch burned more than 2,000 hectares of land, destroying nine houses and leading to the death of one person, when a helicopter that was fighting the fires crashed, killing the pilot.

George Perry, professor of environmental science at the University of Auckland, said on average 4,000 hectares of land is burned in the country each year, with the average fire size being less than four hectares.

“If you look at the average over the last 30 years [THESE FIRES]are very large,” he said. “It’s not nearly as big say as the fires that are going on in Tasmania at the moment, [WHICH ARE]an order of magnitude larger but for New Zealand, they are very significant, especially because the vegetation here has not really adapted to fire at all.”

As Australia sweltered through its hottest month on record in January, more than 50 fires in the southernmost state of Tasmania have destroyed 173,000 hectares of land.

The Nelson area fires in New Zealand have been so severe due to a combination of the land use in the area - a mixture of small holdings, large plantations of pine trees which are highly flammable and scrub - coupled with the heatwave, said Mr Perry.

Richard Kirby, the group recovery manager for Civil Defence, said it might be four of five days before the fire is contained due to the hot, dry conditions.

“There’s no rain on horizon and it’s very dry,” he said. “The realism is coming through that perhaps the worst can happen: that the rivers go dry and we can’t irrigate, and have severe restrictions on urban water use.”

There are concerns that large fires such as this will become more frequent, as New Zealand’s climate become drier and more drought-prone due to climate change.

“There’s a high risk that what we end up with is a more flammable landscape that is more vulnerable to fire,” said Mr Perry, who said New Zealanders would need to adapt in order to protect themselves and their properties from future blazes.

“I would say most people in New Zealand are not prepared at all [FOR FIRE],” said Perry. “People are very prepared for earthquakes and tsunamis and volcanic activity, but I don’t think most people would have thought about fire as a threat. People have always seen it as something that happens in Australia or California or parts of the Mediterranean basin and not something we need to worry about so much.”–Guardian