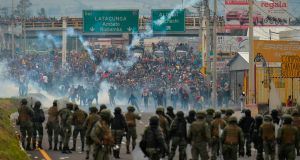 Demonstrators and riot police clash in Quito on Monday following days of protests against the sharp rise in fuel prices following the authorities’ decision to scrap subsidies. Photograph: Rodrigo Bundia/AFP via Getty Images

Ecuador’s government has decamped from the capital in Quito to the coastal city of Guayaquil after five days of violent protests over fuel price rises, in which demonstrators have looted warehouses, forced the closure of oil installations and tried to storm congress.

At least one person has died in the country’s worst violence in years, and nearly 500 have been arrested. Videos on social media showed masked youths setting fire to an armoured personnel carrier and pushing it into a ravine. Indigenous activists with sticks fought running battles with police, who responded with tear gas.

President Lenín Moreno has blamed the chaos on his leftwing predecessor Rafael Correa, who he claims is backed by Nicolás Maduro, Venezuela’s president.

“They are the ones who are behind this attempted coup d’état, and they are using and manipulating some indigenous sectors,” Mr Moreno said in a televised address on Monday from the government’s coastal redoubt, where he was flanked by top military brass.

The president, once an ally of Mr Correa but now his sworn enemy, said he would not back down from his controversial decision to scrap fuel subsidies – an element of the government’s bid to keep its $4.2 billion (€3.8 billion) IMF lending programme on track.

He announced the decision last week, saying it would save the state $1.3 billion a year. Overnight, petrol prices rose sharply and the price of diesel doubled, prompting shopkeepers to raise food prices.

The backlash against the measure was initially led by taxi drivers, but they have since reached a truce with the government, which has imposed a state of emergency across the country. This week, indigenous activists have taken up the cause, leaving remote Andean villages and jungle territories to march on Quito.

The powerful Confederation of Indigenous Nationalities of Ecuador (Conaie) said its members would stay on the streets until the subsidies were reinstated, and would join a general strike planned for Wednesday.

Conaie president Jaime Vargas said 20,000 protesters would be in the capital by then. The federation warned that military and police officers who enter indigenous settlements “will be detained and submitted to indigenous justice”.

Indigenous protests are no small matter in Ecuador. Most of the country’s 17 million population trace their lineage to the pre-Columbian era and have waged successful campaigns to stop foreign multinationals from exploiting mineral riches.

In 2000, Conaie joined forces with the military to oust the country’s president, triggering one of the most turbulent periods in Ecuadorean history. Five years later massive street protests forced another president to flee by helicopter.

Only with the election of Mr Correa in 2006 did Ecuador restore stability. He rose to power on Latin America’s “pink tide” of leftist leaders inspired by Hugo Chávez in Venezuela. While he brought calm he also left the country heavily indebted to China.

Mr Moreno, confined to a wheelchair since being shot during a robbery, succeeded Mr Correa in 2017 and has started unravelling his leftwing legacy. Mr Correa, who lives in exile in Belgium, has branded the president “a traitor”.

As part of his shift to the centre, Mr Moreno turned to the IMF, borrowing $4.2 billion as part of an overall $10.2 billion plan involving other multilateral lenders.

The IMF is urging Ecuador to flip its fiscal deficit into a surplus by next year and cut debt. While the programme has gone smoothly it now faces its biggest test. “Sooner or later, Ecuador had to bite the bullet,” said Ramiro Crespo, an Ecuadorean fund manager and head of Analytica Investments in Quito.

In the light of Argentina’s woes and the near-certainty that Buenos Aires will renegotiate its $57 billion IMF bailout package, analysts are closely monitoring the crisis in Ecuador, the only other country in South America with an IMF lending programme in place.

The fund has backed Mr Moreno but Conaie was clear: “Our fight is to get the IMF out of Ecuador,” it said this week.

The protests have hit oil production. State-owned Petroamazonas suspended operations at three oilfields in the Amazon after they were taken over by “individuals not affiliated with the operation”, the energy ministry said.

It warned that the outage could cost the country nearly 60,000 barrels of crude per day – nearly 10 per cent of national production. Ecuador accounts for roughly 0.5 per cent of global oil output.

As the protests raged in Quito, demonstrators blocked roads to the airport, forcing airlines to reroute flights.

“Indigenous groups have set fire to blockades ... the situation is bad, and I’m just hoping we can somehow get to the airport,” tweeted Shannon Sims, a freelance journalist. She later said she had made it via a back road.

The US government said it was monitoring the developments, while in Venezuela, opposition leader Juan Guaidó blamed “a group financed by Mr Maduro’s accomplices” for stirring discontent. The Colombian government urged its citizens in Ecuador to stock up on food and water.

From Belgium, Mr Correa tweeted a video, describing the Moreno government as “a dictatorship” and calling for fresh elections: “I made a mistake with Moreno, the biggest fraud of our times.” – Copyright The Financial Times Limited 2019