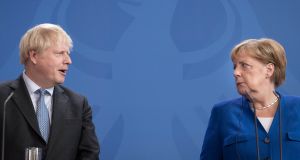 British prime minister Boris Johnson and German chancellor Angela Merkel. German officials say the chancellor will continue looking for a solution to the Brexit deadlock until time is up. Photograph: Stefan Rousseau/PA Wire

Germany has shrugged off British leaks of a Brexit phone call between prime minister Boris Johnson and chancellor Angela Merkel.

Dr Merkel’s spokesman, Steffen Seibert, said that, as was usual, he would not comment on “private, confidential” talks between government leaders.

Around Berlin on Tuesday, however, the British breach of diplomatic protocol and subsequent spin in Tory-friendly media was greeted with a weary sigh.

A No 10 Downing Street source told broadcast journalists that Dr Merkel had “made clear a deal is overwhelmingly unlikely and she thinks the EU has a veto on [the UK] leaving the customs union”.

While the Downing Street source claimed the conversation was a “useful clarifying moment”, Norbert Röttgen, a senior official in Dr Merkel’s Christian Democratic Union (CDU) and head of the Bundestag foreign affairs committee, said there was “no new German position on Brexit”.

“Frankly, a deal on the basis of Johnson’s proposals until October 31st has been unrealistic from the beginning and yet the EU has been willing to engage,” he wrote on Twitter. “Blaming others for the current situation is not fair play.”

Senior German sources say the conversation between the two leaders was not as described in the UK media.

Berlin is doubtful about the UK customs proposals for Northern Ireland and their consequences for the integrity of the EU single market – a key German priority in Brexit talks.

However, officials remain adamant that the chancellor, in her conversation on Tuesday with Mr Johnson, as in the past would continue looking for a solution to the Brexit deadlock until time was up.

Reacting to the Downing Street spin, one official said it , would not help these efforts.

Another said Berlin would not be spun, provoked or leaked by Downing Street into throwing in the towel or accepting blame for the failure of Brexit talks.

From the beginning Dr Merkel has been mindful of balancing a special German responsibility for preserving EU integrity with the special Irish concern to preserve an open Border and the Belfast Agreement.

Last April in Dublin she said it was “moving” to learn about daily life from people living on and around the Border.

As a former East German, she said she “knew only too well what it means once borders vanish, once walls fall, and that one needs to do anything in order to bring about a peaceful co-operation”.

Her discussions that day, she said, had left her mindful of the heavy death toll from Northern Ireland violence, and would “encourage” her to ensure the “peaceful” Good Friday agreement was upheld.