‘Responsibilities will be established. Justice will pass, as it must’ 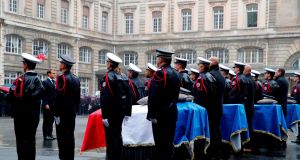 French president Emmanuel Macron participates in a ceremony at Paris police headquarters to pay respects to the victims of an attack on October 4th. Three police officers and an administrative worker were murdered. Photograph: Francois Mori

The entire French nation must unite, mobilise and act to end Islamist extremism, President Emmanuel Macron said in an homage to four police personnel who were murdered last week. He called on the country to “build a society of vigilance” to achieve that goal.

The families of the slain policemen and a policewoman arrived first in the court of honour of the Paris prefecture, where only five days earlier a 45-year-old West Indian computer technician, Mickaël Harpon, was shot dead after stabbing four colleagues to death with kitchen knives.

Families and agents from the directorate of intelligence of the Paris prefecture (DRPP) watched the ceremony from a white tent set up to preserve their privacy. A police union said intelligence officers were refused permission to wear face masks to protect their identity.

A USB stick containing the home addresses of at least a dozen agents, along with Islamic State propaganda videos, was found in Harpon’s desk drawer at the prefecture, not at the killer’s home, as was previously reported. It is not known whether he downloaded the information from DRPP files, or gathered it himself. Nor is it known if he shared it with fellow Islamists.

In 2016, a jihadist called Larossi Abballa murdered a policeman and his wife in their home west of Paris. The authorities still do not know how Abballa obtained their address.

Hundreds of uniformed policemen stood to attention while the police band played the Marseillaise. Four coffins draped with the French tricolour were carried into the courtyard. The silence was broken by a drumroll and the whirr of camera auto drives.

Interior minister Christophe Castaner – who is blamed by some for the intelligence failings that made the murders possible – laid the medal of the Legion of Honour on each of the four caskets. For the first time since they were murdered last Thursday, the victims’ full names were given.

The Marseillaise played a second time. Macron stood a long moment before the caskets, while drums rolled and a funeral march played.

“Seven minutes sufficed to plunge the Paris police prefecture into one of the most painful tragedies of its history. France is in shock,” Macron said. As he spoke, the tricolours covering the caskets flapped in the wind and rain.

“Light will be shed on the questions raised. Responsibilities will be established. Justice will pass, as it must,” Macron continued.

The National Assembly on Tuesday established a commission of inquiry into the killings, in addition to an inquiry already under way by the intelligence committee. The inspectorate for intelligence services, which answers to the prime minister, has also launched two investigations.

But it may never be fully understood how a radicalised Islamist was assigned to collect information on radical Islamists, or how he was able to murder four colleagues in one of the most secure places in France. The government cannot “guarantee that all information will be made public” because some of it is classified, government spokeswoman Sibeth Ndiaye told France 2 television.

Macron saluted the police trainee, on the job for only six days, who shot Harpon dead in the courtyard. He too was to receive the Legion of Honour, in private.

“In this moment of grief, I bow in the name of the entire nation, before the grief of the families,” Macron said. He named the fallen, and briefly sketched their family situations.

Damien Ernest (50) was a commandant in the police force, which he joined 28 years ago. Macron said he and the woman with whom he had two children were planning to marry soon.

Anthony Lancelot (39) joined the DRPP in 2003, the same year as Mickaël Harpon. He had two young daughters.

One of Brice Le Mescam’s friends described the gay 38-year-old policeman as humorous, intelligent, mischievous and provocative on Facebook. He was a deputy administrator in the DRPP.

Aurélia Trifiro (39) met her husband, also a policeman, at work at the Paris prefecture. They had two children, aged five and eight. “Since she was a little girl, she talked about becoming a policewoman. This profession was her whole life,” Trifiro’s grandmother, Henriette, told Le Parisien newspaper.