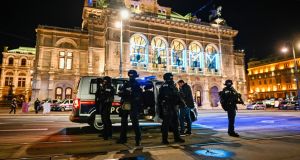 Vienna police sealed off part of the Austrian capital’s city centre on Monday night after an “apparent terror attack” outside its main synagogue.

Police said dozens of shots were fired at about 8pm on the street outside the building, scattering passersby in all directions. Shootings also took place at five other locations, with two dead and 15 injured, including a police officer.

A suspected gunman was shot to death, said an interior ministry spokesman, adding that others believed to have been involved were on the run.

“It sounded like fireworks, then it was clear it was shots,” said one eyewitness, who asked not to be named, to ORF television. “Then there was a man running down Seitenstetten Street who shot around him crazily with an automatic weapon. Then the police came and shot.”

Austrian interior minister Karl Nehammer appealed to people to stay indoors if they were in the area, a popular going-out quarter dubbed the “Bermuda triangle” by locals, adding that it was believed the incident was an “apparent terror attack”.

Mr Newhammer said that all six locations in the attack are in the immediate vicinity of the street housing the synagogue.

Several suspected perpetrators are on the loose and a manhunt is under way, he added later, calling the attackers “heavily armed and dangerous” and urging the public to stay indoors until the all-clear is given.

One person had been arrested, news agency APA said, citing the interior ministry.

A spokesman for Vienna’s Jewish community said it was not immediately clear if the synagogue was the target of or a backdrop to the attack. No events were taking place in the synagogue or in the adjoining complex and both were closed.

“The perpetrator didn’t target the city temple,” said Rabbi Schlomo Hofmeister, an eyewitness. He said that he saw at least one person fire shots at people sitting outside bars in the street below his window.

“They were shooting at least 100 rounds just outside our building,” Rabbi Hofmeister said. “All these bars have tables outside. This evening is the last evening before the lockdown.

“As of midnight, all bars and restaurants will be closed in Austria for the next month and a lot of people probably wanted to use that evening to be able to go out.”

Police sealed off the area around Schwedenplatz, adjacent to the Danube canal, with trams and underground trains redirected away from the area.

On social media, police urged people to avoid the adjoining streets, and not to post images of the scene on social media. Before their appeal, images appeared online appearing to show pools of blood before the synagogue.

“We heard the shots and then it was ‘lights out, doors closed’,” said a 53-year-old tourist to the APA news agency. “Then we all lay on the ground, the fear among the guests was crazy.”

Austrian chancellor Sebastian Kurz said the shootings in Vienna were a “repulsive terror attack”, adding that the army would protect sites in the capital so the police could focus on anti-terror operations. Additional reporting: Reuters/AP