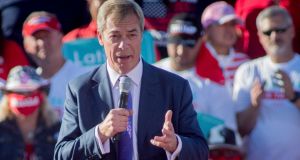 Nigel Farage speaks at a rally for Trump in US. Farage is launching new British party. Photograph: Rick d’Elia/EPA

Cast by his supporters as the godfather of Brexit, Mr Farage said Mr Johnson had terrified the United Kingdom into submission over Covid-19 and squandered vast amounts of taxpayers’ money while holding out hopes of a “miraculous” vaccine.

“The single most pressing issue is the government’s woeful response to coronavirus,” Mr Farage and Brexit Party chairman Richard Tice said in a joint article in The Daily Telegraph.

“Ministers have lost touch with a nation divided between the terrified and the furious. The debate over how to respond to Covid is becoming even more toxic than that over Brexit.”

Mr Johnson on Saturday ordered England back into a national lockdown from Thursday morning after the United Kingdom passed the milestone of one million Covid-19 cases and a second wave of infections threatened to overwhelm the health service.

The United Kingdom, which has the biggest official death toll in Europe from Covid-19, is grappling with more than 20,000 new coronavirus cases a day and scientists have warned the “worst case” scenario of 80,000 dead could be exceeded.

Mr Farage, a former commodities trader, has transformed British politics over the past decade by poaching Conservative voters to force a succession of prime ministers toward ever tougher positions on Europe.

Mr Farage, whom US president Donald Trump calls a friend, has spoken alongside the president in the election campaign.

Instead, Mr Farage proposed targeting those most a risk, like the sick and the elderly, but said ordinary people should not be criminalised for trying to live normal lives such as meeting family for Christmas.

“The rest of the population should, with good hygiene measures and a dose of common sense, get on with life. This way we build immunity in the population,” he said.

The perceived electoral threat to the Conservatives from the United Kingdom Independence Party which Mr Farage formerly led was one of the main reasons then-prime minister David Cameron decided in 2013 to promise the Brexit referendum.

Shunned by the British political establishment, Mr Farage, backed by Eurosceptic financiers, helped sell Brexit to millions of voters in England and Wales who felt ignored by the mainstream Conservative and Labour parties.

The party will be recast as Reform UK – a nod to his view that the country is in urgent need of fundamental reform. – Reuters

5 Four men arrested by gardaí over shooting in Dublin