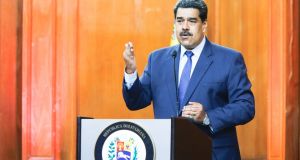 Venezuelan president Nicolás Maduro: “Who are they to try to impose themselves with threats?” he said of the EU. Photograph: EPA/Miraflores Palace Press Office

Venezuelan president Nicolás Maduro has ordered the head of the European Union mission in Caracas to leave within 72 hours after the bloc announced sanctions against 11 officials who are loyal to the embattled socialist leader.

“Who are they to try to impose themselves with threats?” said Mr Maduro in a television address, before ordering the EU ambassador to Venezuela, Isabel Brilhante Pedrosa, to leave the country.

“We will sort it out in 72 hours,” Mr Maduro said. “She will be given a plane to leave, but we will arrange our things with the European Union.”

It came after the EU announced that 11 officials would be added to their sanctions list, meaning they will be subject to a travel ban and an asset freeze, “because of their role in acts and decisions undermining democracy and the rule of law in Venezuela”.

The officials included legislator Luis Parra, who is backed by Mr Maduro and was declared head of the National Assembly after troops blocked opposition rival for the presidency Juan Guaidó from entering the chamber.

“The individuals added to the list are responsible notably for acting against the democratic functioning of the National Assembly, including by stripping the parliamentary immunity of several members of its members, not least its president, Juan Guaidó,” the EU statement read.

“Actions motivating the decision for listing also include initiating politically motivated prosecutions and creating obstacles to a political and democratic solution to the crisis in Venezuela, as well as serious violations of human rights and restrictions of fundamental freedoms, such as freedom of press and speech,” it added.

The South American nation’s supreme court, which is loyal to Mr Maduro, ratified Mr Parra as president of the National Assembly in May in a ruling the EU has described as illegitimate.

Also added to the new sanctions list were Franklyn Duarte and Jose Gregorio Noriega, allies of Mr Maduro who were named vice-presidents of the assembly in the May ruling.

Relations between the EU and Venezuela have been tense since 2017, when the bloc imposed sanctions in a first for a Latin American country and put in place an arms embargo.

The new list brings the number of Venezuelan individuals under sanctions to 36.

Tony Holohan to step back from role as chief medical officer

1 Tony Holohan to step back from role as chief medical officer
2 Pygmalion pub mired in weekend social distancing row
3 All change at the unique Ashford Castle in era of Covid-19
4 Bobby Storey: The IRA's planner and enforcer who stayed in the shadows
5 Ireland has lowest current incidence of Covid-19 in western Europe
Real news has value SUBSCRIBE