Coronavirus: Vaccine scepticism in US may scupper immunity, says Fauci 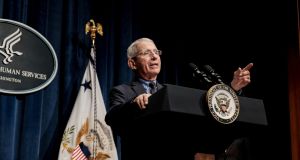 Infectious disease expert Dr Anthony Fauci has warned that the United States may not achieve herd immunity even if a coronavirus vaccine is developed, pointing to a high level of public scepticism about vaccines.

In an interview with CNN, Dr Fauci said there is “a general anti-science, anti-authority, anti-vaccine feeling among some people in this country – an alarmingly large percentage of people, relatively speaking”, adding that the government has “a lot of work to do” to educate people about vaccines.

Dr Fauci also suggested that a vaccine against Covid-19 would not be as effective as other vaccines.

“The best we’ve ever done is measles, which is 97 per cent to 98 per cent effective,” he said. “That would be wonderful if we get there. I don’t think we will. I would settle for [a] 70 per cent, 75 per cent effective vaccine.”

He was speaking as the United States continued to see a rise in cases, particular in the south and west of the country.

Several states, including Texas and Florida, have been forced to alter their reopening plans as they battle a sharp increase in infections. The US accounts for around a quarter of coronavirus cases around the world, and has reported more than 2.56 million cases.

In Florida, there was some reprieve from the recent spike in cases. A further 5,409 were recorded on Monday in the previous 24-hour period, but this was lower than the daily highs of more than 8,000 cases per day.

On Monday, pharmaceutical company Gilead announced that a course of remdesivir – the only approved drug that helps treat coronavirus patients – will cost $2,340 (€2,080) for a five-day course, and $3,120 for health insurers. The drug helps reduce the recovery time for patients with the disease. The company had previously come under scrutiny for the pricing of drugs.