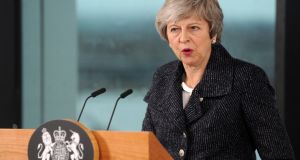 The Government has rejected a fresh appeal from Theresa May to reopen the withdrawal agreement, saying it was concerned about London’s “unreasonable expectations” about changes to the backstop.

Following a speech by Mrs May in Belfast on Tuesday, Government Buildings issued a short statement which welcomed her commitment to ruling out a hard border in the future, but insisted: “The EU position is clear and not for changing. There is scope to adjust the political declaration but not the withdrawal agreement.”

Mrs May is visiting Northern Ireland where she was meeting with business leaders, followed by engagements with the political parties on Wednesday. She reiterated her commitment to the peace process, and said her promise to avoid a hard border was “unshakeable”.

Mrs May heads to Brussels on Thursday, where she will meet with the president of the European Commission, Jean-Claude Juncker, for talks. Yet despite the intensive engagement senior Irish and EU sources say there is unlikely to be any serious negotiations with the British government until a series of votes on the British government’s plans take place in the House of Commons next week.

Taoiseach Leo Varadkar will go to Brussels on Wednesday for a series of meetings with senior EU figures, including Mr Juncker, head of the European Council (the body of EU leaders) Donald Tusk, and the commission’s chief Brexit negotiator Michel Barnier.

A statement from Mr Varadkar’s office on Tuesday night said he would discuss the preparations for a no-deal outcome and potential supports for Ireland in that eventuality.

Mr Varadkar is also scheduled to visit the North on Friday.

A team of European Commission officials visited Dublin on Tuesday for a series of meetings with Government departments on no-deal preparations.

The group cancelled a planned press briefing at the last minute, but The Irish Times understands that the items for discussion included customs and sanitary controls at ports and airports, the UK “landbridge”, energy, business preparedness, agriculture and fisheries, taxation issues, transport, medicines, judicial co-operation, the common travel area and data-sharing.

Meanwhile, a group of prominent Irish-Americans, including former US Special Envoy to Northern Ireland Gary Hart and five former US ambassadors, have written to Mr Varadkar and Mrs May expressing alarm that the Belfast Agreement could be jeopardised because of Brexit.

The letter, which has been signed by 40 senior figures, comes ahead of Tánaiste Simon Coveney’s visit to Washington this week, where he will discuss Brexit with senior Irish-American figures on Capitol Hill. It reflects growing concern in US circles about the impact of Brexit on the Border in Northern Ireland.