UK looking for alternatives to Border backstop. Do they exist? 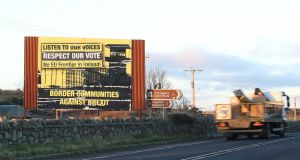 The UK government has announced that a special group has been established to look at alternatives to the proposed backstop plan to avoid a hard Irish Border after Brexit. And German chancellor Angela Merkel said on Monday that “ creative solutions” on the Border issue must be examined. But just what could technology and advanced border processes achieve?

Following the rejection of the draft withdrawal agreement in a House of Commons vote last month, the UK prime minister is pushing a plan to find alternatives to the backstop for the Irish Border. The backstop, designed to be a guarantee of no hard Irish Border no matter how future trade talks between the EU and UK work out, is unpopular with the Brexiteer lobby. This is because it would involve the UK remaining in a customs union with the EU until another way to avoid a hard Border is found – and the North would also have to follow other EU rules and regulations. So Theresa May has established a group – “The Alternative Arrangements Working Group” – to examine what alternatives exist to a hard Irish Border.

What are they likely to look at?

They are likely to examine whether a combination of advanced customs processes and technology could be used to avoid a hard Irish Border after Brexit. They may also look at the concept of putting a time limit on the operation of the backstop.

Haven’t we been here before?

Yes. The UK government has looked in detail at this issue and it was also studied at 18 months of talks between the EU and UK leading up to the withdrawal agreement. Trade experts say that border checks can be reduced by using such methods, but by no means eliminated. The EU side has pointed out that there is no border anywhere in the world where some physical checks do not take place. UK home secretary Sajid Javid said over the weekend that he had been assured by the UK Border Force, the body which controls Britain’s borders ( though has no role in the Irish Border) that alternative arrangements did, indeed exist.

And the EU’s deputy chief negotiator, Sabine Weyand, this weekend tweeted a reply to the home secretary’s claim saying that not having appropriate checks would be a “ dereliction of duty by public authorities” who must ensure public safety and enforce international agreements.

What are the key points? What checks are needed and what can –and can’t – technology do?

A range of checks are needed on goods moving from one trading bloc to another. Broadly, goods need to be checked to clear customs, ensuring that proper duties and taxes are paid and that the content in the truck is what has been declared. And separate checks are needed to ensure goods meet standards and regulations – particularly to ensure food and animal safety.

In terms of customs , a lot can be achieved by large companies registering as what is called authorised economic operators – though this requires significant additional bureaucracy – and pre-registering the movement of regular consignments. However some way is still needed to check the actual movement of these trucks – border cameras might help, though erecting these involves infrastructure – and random checks are needed to ensure compliance, at or near the border.

Carol Lynch, partner in BDO in Dublin, says that generally 95 per cent of pre-registered trucks can pass through a border point without further checks, though some way is needed to monitor their entry. A further 3 per cent would be subject to checks on paperwork afterwards, while 2 per cent would be subject to full physical inspections, either due to an assessment that they are risky, or just as a random control. Some of these checks could be carried out away from the border itself. But even the establishment of infrastructure away from the border – saw inspection posts where truck could be pulled in – would be controversial and potentially provide a target for attacks.

At a local level, smuggling checks would also need to be stepped up, as opportunities for profitably organised crime would increase between two different trading blocs and as VAT rules changed. The police on both sides of the border are already engaged in anti-smuggling operations, but these almost certainly need to be stepped up, particularly as the rules applying in both jurisdictions converged, creating more opportunities for smuggling.

Would that be it?

No. A crunch issue is finding a way to monitor the application of rules and regulations on products – as set down by EU single market rules – particularly the movement of livestock and food. Food and livestock must be checked at the border as they enter the EU single market at designated veterinary inspection points.

The Brexiteer lobby – in a report published in December called A Better Deal – said that Irish food and livestock border checks can be avoided by a combination of Ireland remaining a single bio-security zone, necessary checks taking place at factories on each side of the border and mutual recognition of regulatory regimes.

However, the EU rules require detailed checks on both livestock – more than currently take place at Larne, on the entry of livestock from the UK – and on food products. Trade experts believe that, in the event of a no-deal Brexit, significant checks would probably still need to take place at the Irish Border, to guard against animal diseases, for example, and – at a minimum – check food products which had entered the UK from third country markets and were now entering the EU’s single market. This could, in time, also be a target for smuggling, particularly if the UK followed a cheap food policy of importing from other markets where different standards apply.

So what is the bottom line?

Technology and advanced processing can reduce the need for border checks but not eliminate them. And, as Sam Lowe, a trade expert in the Centre for European Reform in London points out, fewer checks at the border itself will mean more random checks and controls away from the Border, which would also be politically sensitive.

The withdrawal agreement commits both sides to aim for the absence of physical infrastructure and the associated checks and controls.

Ireland would like the Border to stay just as it is now – but this would require the UK, or at least the North, staying in a customs union with the EU and maintaining the same rules and regulations applying to goods in many areas. The Brexiteer lobby does not want to do this. Hence the search for alternative solutions.