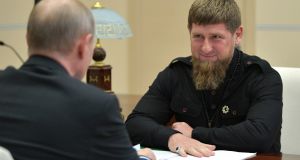 Chechnya has been ruled since 2006 by Ramzan Kadyrov (right), who has helped the Kremlin crush a long-running Islamist insurgency while running the region as a personal fiefdom. Photograph: Alexei Druzhinin\TASS via Getty Images

The Kremlin has failed to address grave human rights abuses in the Russian republic of Chechnya, where the authorities exert control by violently and unlawfully persecuting perceived opponents, according to a report published this week.

A fact-finding report by the Organisation for Security and Co-operation in Europe said arbitrary and unlawful arrest and detention, harassment and torture as well as enforced disappearances and extrajudicial executions had increasingly become “standard practice” for Chechen law enforcement and security agencies.

A predominantly Muslim republic in the North Caucasus, Chechnya has been ruled since 2006 by Ramzan Kadyrov, who has helped the Kremlin crush a long-running Islamist insurgency while running the region as a personal fiefdom. In his youth Mr Kadyrov fought on the side of rebels battling Russian federal forces in a separatist war in the 1990s, but now presents as a fierce Russian patriot undyingly loyal to Vladimir Putin.

Russia has not lived up to its responsibilities to ensure the rule of law and investigate alleged human rights crimes in Chechnya, according to the Osce report that covers the period from January 2017 to November 2018.

Instead there was an “impression that Chechnya is treated like a special case, an area of exception, where the institutions of the Russian Federation are not effective and a special regime of impunity is tolerated for the sake of stability”.

The independence of the judiciary could not be assumed in Chechnya and human rights cases should be transferred to courts outside the republic.

The report urged Russia to investigate the Chechen authorities’ discrimination against the LGBTI community in general and to open a criminal case over alleged violations against a young gay man, Maksim Lapunov, in particular.

Mr Lapunov publicly claimed that he was among the victims of a brutal gay purge in Chechnya last year that sparked an international outcry.

Mr Kadyrov has fired up traditional homophobia in Chechnya, lambasting gays as “devils” and “not people”. More than 120 LGBTI people have fled Chechnya to seek asylum in western Europe or Canada after facing official harassment or threats from their own families.

The report found evidence of increasing repression against human rights defenders in Chechnya – a group that Mr Kadyrov pledged to ban this year for “preventing our people from living in peace”. It highlighted the case of Oyub Titiev, the head of the Memorial Human Rights Organisation in Chechnya, who is undergoing trial on narcotics charges.

Supporters of Mr Titiev say the case has been fabricated to punish him for monitoring police use of torture and forced disappearances of detainees.

Compiled by Wolfgang Benedek, professor of international law at the Karl Franzens University of Graz, the report was invoked by 16 OSCE countries using a rarely used diplomatic tool known as the Moscow Mechanism, which allows for investigations to be launched without a consensus from the organisation’s 57 members.

The Russian OSCE mission declined to assist in preparation of the report or to help arrange a visit to Russia for Prof Benedek. In a letter to Prof Benedek dated November 16th, 2018, the Russian mission said the “concerns and accusations” leading to the rapporteur’s mandate were “biased and groundless”, and demonstrated a “policy of double standards in the use of OSCE human dimension mechanisms that can only increase the degradation of the OSCE”.

The US state department welcomed the OSCE report in a statement on Friday and called on Russia “to protect the human rights of all within its borders, consistent with international law, OSCE commitments, and its own constitution”.