Former leader, who fled to Russia after Kiev bloodshed in 2014, denies guilt 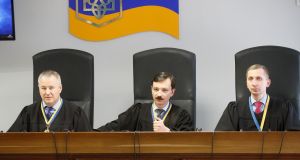 A Kiev court has found former Ukrainian president Viktor Yanukovich guilty of treason and sentenced him in absentia to 13 years in jail, for his role in helping Russia seize Crimea and foment war in eastern Ukraine in 2014.

Mr Yanukovich fled to Russia, where he remains in exile, after his security forces shot dead dozens of protesters on Kiev’s Maidan square on February 20th, 2014.

A panel of three judges found on Thursday that on March 1st of that year, Mr Yanukovich sent a letter to Russian president Vladimir Putin asking him to send his country’s troops into Ukraine to restore order.

Just days earlier, Russian troops without insignia on their uniforms had seized state buildings in Crimea and within weeks similar “little green men” would do the same in the eastern Donbas region of Ukraine that borders Russia.

“Yanukovich signed and submitted to Russian president Vladimir Putin a request to use the Russian armed forces on the territory of Ukraine, thus assisting Russia in conducting undermining activities against Ukraine,” judge Vladislav Deviatko said in announcing the verdict.

Crimea remains under Russian control and the continuing war between Moscow-led militia and Ukrainian troops in the industrial Donbas area has killed more than 10,300 people, displaced 1.6 million and ravaged Ukraine’s economy.

The Kremlin and Mr Yanukovich still insist he was ousted in a western-backed coup and denounce Ukrainian president Petro Poroshenko and his government, who want to integrate the country with the West after centuries of Russian domination.

Vitaliy Serdyuk, a lawyer for Mr Yanukovich, said he would appeal against the verdict and denounced the trial as “political”.

“The defence has amassed plenty of material that serves as evidence of state treason and a whole range of other crimes committed by the people who seized power in Ukraine. This material will be published soon,” he added.

Mr Yanukovich’s defence team said he could not attend or follow the culmination of his trial due to injuries suffered playing tennis in Moscow late last year.

He has previously admitted sending a letter to Mr Putin asking for help in 2014, but claimed it was not a request for Russia to invade Ukraine.

Vitaly Churkin, who was then Russia’s envoy to the United Nations, brandished the letter during a Security Council debate on the turmoil in Crimea on March 3rd of that year.

Reading from the letter, Mr Churkin quoted Mr Yanukovich as writing that Ukraine had “plunged into chaos and anarchy” due to “outright terror and violence driven by the West” and that Russian-speakers were being “persecuted on political and language grounds”.

“In this context, I appeal to the president of Russia Vladimir V Putin to use the armed forces of the Russian Federation to re-establish the rule of law, peace, order, stability and to protect the people of Ukraine,” the letter said.