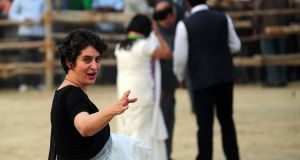 Priyanka Gandhi Vadra, the 47-year-old scion of India’s Nehru-Gandhi dynasty, has formally entered politics by joining the opposition Congress Party her family founded over 130 years ago.

The move comes weeks ahead of the country’s impending general elections.

She was given charge of the politically sensitive region of eastern Uttar Pradesh on Wednesday, and will report to older brother Rahul Gandhi, who heads the Congress Party.

“We will play politics on the front foot,” Mr Gandhi (48) told reporters, using a cricketing metaphor. “I am happy my sister, who is very capable, will work with me.”

Mr Gandhi is attempting to forge an opposition alliance to oust prime minister Narendra Modi’s Hindu nationalist Bharatiya Janata Party (BJP)-led government, which won a resounding victory in the 2014 parliamentary polls and is looking well-placed to be re-elected.

The Congress Party, for its part, suffered its worse-ever political drubbing in the 2014 elections, winning just 44 seats in the 545-member Indian parliament.

By inducting his sister into his party’s hierarchy, Mr Gandhi hopes to neutralise Mr Modi and the BJP’s sway over Uttar Pradesh , which sends 80 MPs to parliament, the largest number of all 29 Indian states. The BJP won 71 of those seats in the last elections.

Ms Gandhi’s formal entry into politics has led to the BJP accusing the Gandhi family of perpetuating dynastic rule in the Congress Party founded by, among others, her great-great grandfather Motilal Nehru in 1885.

Her great-grandfather, Jawaharlal Nehru, was India’s first prime minister, serving for 17 years after independence in 1947. He was succeeded, after a brief hiatus, by her grandmother Indira Gandhi, who was assassinated by her bodyguards in 1984.

Her father, Rajiv Gandhi, was prime minister from 1984 to 1989; he was killed in 1991 by a suicide bomber during an election rally in southern India.

A few years later Rajiv’s Italian-born widow, Sonia Gandhi, became Congress Party chief, a post she retained for 19 years until she was succeeded by her son, Rahul, in late 2017.

During her period as party leader, Sonia Gandhi emerged as India’s most powerful politician, controlling two back-to-back Congress Party-led federal coalitions headed by prime minister Manmohan Singh until 2014, despite being merely an MP.

Such family supremacy, in turn, perpetuated the axiom in domestic political circles that without a Gandhi at its helm the Congress Party, which has ruled India for some 54 years since independence, was doomed to failure.

Bearing a strong physical resemblance to Indira Gandhi, Priyanka is the mother of two teenage children and is married to businessman Robert Vadra, who has been under investigation for questionable land deals executed when the Congress Party was in power.

In previous elections she campaigned for her brother and mother in their pocket boroughs in Uttar Pradesh, but declined to take a prominent political role, shunning all publicity and fiercely protecting her privacy.

“For years Priyanka has remained an unknown wild card for the Congress Party,” said political analyst Seema Mustafa. “She will now be tested in the hurly-burly of Indian politics.”