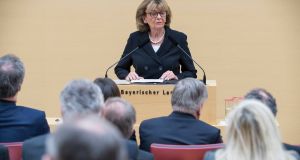 Members of Germany’s far-right Alternative für Deutschland (AfD) walked out of the Bavarian parliament on Wednesday after a Holocaust survivor accused them of trivialising Nazi crimes.

During a speech to the parliament, Charlotte Knobloch, the 86-year-old head of Munich’s Jewish community, called on all mainstream parties to tackle the threat to democratic values she sees in the AfD.

“Here today a party is represented that disdains these values, trivialises the crimes of the National Socialists and maintains close ties into the far-right milieu,” said Ms Knobloch. “The so-called Alternative für Deutschland bases its politics on hate and exclusion and, for me, does not stand on the basis of our democratic constitution.”

With that, 18 of the AfD’s 22 MPs stood up and left the chamber. As they departed, Ms Knobloch called on remaining politicians to “stand against hate”.

“It is our responsibility that the unimaginable is never repeated,” she added. “‘Never again’ is the foundation of our federal republic.”

Politicians from the other parliamentary parties gave Ms Knobloch a standing ovation for her speech. The AfD MPs returned after 10 minutes, when the speech had finished.

But the Bavarian parliament wasn’t finished with them. Bavarian state premier Markus Söder criticised the AfD’s “disrespectful” behaviour towards their guest.

“It unmasks them and shows their true character,” he said. “True democrats would have behaved differently.”

In recent years AfD politicians have shifted their focus from criticising the euro to attacking immigration. Part of their political strategy has been to maximise publicity with carefully-calibrated remarks shattering German taboos about the Third Reich. One party leader said the Nazi-era was “birdshit” in the long sweep of glorious German history; another described Berlin’s Holocaust memorial as a “disgrace”.

Ahead of January 27th, the anniversary of the liberation of Auschwitz, Ms Knobloch suggested rival parties needed to tackle the AfD without blowing the party out of proportion.

Autumn elections in eastern Germany, increasingly an AfD heartland, could see the party earn more than 20 per cent of the vote.

But, after short surges in support, the party has returned in national polls to the 12.6 per cent it attracted in the 2017 federal election.

‘Collecting basin for the dotty’

While that was enough to make the AfD the largest Bundestag opposition party, Ms Knobloch insisted it is “no mass movement, but a collecting basin for the dotty and confused”.

Further wind may yet leave the AfD’s sails in 2019, with new immigration figures released on Wednesday suggesting a slide in numbers of people seeking asylum in Germany.

Compared with 700,000 asylum applications in 2016, the number in 2018 dropped by 77 per cent to 162,000. About one-third of those applications were successful, according to migration authorities, with processing times down to three months.

On Twitter, the AfD Bavaria leader Katrin Ebner-Steiner said the walkout was an “appropriate reaction to sweeping defamation”.

Many Twitter users disagreed, with one writing: “Walking out was appropriate, but I ask myself why the AfD returned?”