US recognition of rival leader ratchets up pressure on Maduro 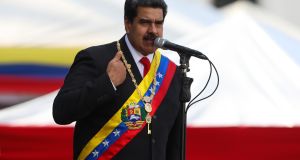 Time has been called too often on the chavista regime during its two decades in charge of Venezuela for anyone to declare with confidence that its end is now near. But this week marks a dangerous escalation in a political crisis that has already lasted for years, leaving hundreds of people dead and destroying the economy of the oil-rich nation.

By declaring himself interim president this week, opposition leader Juan Guaidó has raised the stakes in the already long stand-off with embattled president Nicolás Maduro. But swift recognition of Guaidó by the US and a host of neighbouring nations has dramatically ratcheted up the already intense pressure Maduro has been operating under in recent days.

Already this week at least 16 people have been killed in street clashes between opposition supporters and security forces. The protests followed the arrest of about two dozen national guards reportedly for plotting to overthrow Maduro as rumours of mounting discontent within the military continue to feed expectations that the army’s long alliance with chavismo might be unravelling.

The decision by the Trump administration to quickly recognise Guaidó as president is Washington’s most direct intervention in Venezuela’s internal affairs since it backed a botched coup against Maduro’s predecessor and chavismo founder Hugo Chávez in 2002. That experience left US policy-makers bruised after the putsch fizzled out within two days in the face of massive street protests and, once restored to power, Chávez entered into a close alliance with Cuba’s communist regime.

But though chavismo has over the decades used the hostility of Washington to rally support at home and around the region, now it is the one looking isolated. A political sea-change in recent years that has turned South America’s political map from red to blue has seen countries once resolutely non-interventionist, when not openly allied with Caracas, increasingly willing to confront the Maduro regime.

US recognition of Guaidó was swiftly followed by a majority of South American states, including both Brazil and Argentina, who until a few years ago were both led by left-wing allies of chavismo but are now under right-wing administrations that have openly called for Maduro to quit and democracy to be restored.

I hope that all of Europe will unite in support of democratic forces in #Venezuela. Unlike Maduro, the parliamentary assembly, including Juan Guaido have a democratic mandate from Venezuelan citizens.

Caracas responded to Washington’s support of Guaidó by severing relations and ordering its diplomats to leave the country within 72 hours, an order Washington refuses to recognise. The move reflected the Venezuelan regime’s confrontational approach to threats against it, but also the fact it still has powerful strategic allies.

Russia strongly condemned the US move and warned it would result in “anarchy and a bloodbath”, while China declared its continuing support for efforts “to protect the country’s sovereignty, independence and stability”. Their backing for Maduro in part derives from the huge debts Caracas has run up with both Beijing and Moscow.

The opposition has threatened not to recognise these obligations, which they denounce as illegitimate.

In recent months, Moscow has emerged as Caracas’s lender of last resort after Venezuela was declared in default on about $60 billion (€52.9 billion) of its debt by international ratings agencies. Meanwhile, China reined back on its own lending, which already amounts to tens of billions of dollars, as it became concerned about its ability to ever recoup the cash.

Those fears stem from the fact that despite having the world’s largest oil reserves, Venezuela’s economy is in ruins after a disastrous 20-year experiment in Hugo Chávez’s so-called “21st Century Socialism” that has left much of the population hungry and caused a breakdown in public health. Mismanagement and rampant corruption have led to a collapse in oil production, the country’s one source of the foreign revenue needed for imports of food and medicines, provoking a brutal contraction in gross domestic product and hyperinflation.

Already, millions of Venezuelans have fled abroad, but despite the unravelling of the country’s social fabric, the Maduro regime shows no signs that it is willing to step aside. Despite reports of discontent in the lower ranks, much of the top military brass is deeply compromised by the regime’s corruption, including drug trafficking, and is believed to be unwilling to take its chances with the opposition.

On Thursday some of the country’s top military commanders took to the airwaves to express their loyalty to Maduro with some denouncing the opposition’s move as treason.

And Maduro can still rely on the support of Cuba. Its intelligence and security personnel are a key prop to his regime, and expert in quashing plots and retaining power despite the backdrop of punishing regional hostility.

The political storm raging in Caracas might be the worst in years – but expect Maduro and his Cuban minders to batten down the hatches and attempt to ride it out.