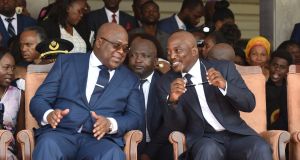 Opposition leader Felix Tshisekedi called for national reconciliation on Thursday as he became Democratic Republic of Congo’s president, succeeding Joseph Kabila in Congo’s first transfer of power via an election in 59 years of independence.

“We want to build a strong Congo, turned toward its development in peace and security,” he said to cheers from thousands of supporters on the lawn of the presidential palace. “A Congo for all, in which everyone has a place.”

The pageantry of the ceremony was briefly interrupted when Mr Tshisekedi was taken ill during his inaugural address and had to sit down. But he returned to the podium moments after a brief pause, saying he was exhausted by the election and the emotion of the moment.

His spokesman later said that his bulletproof vest had been too tight.

Mr Tshisekedi’s victory in the December 30th election was marred by accusations he struck a backroom deal with the outgoing president to deny victory to another opposition candidate, Martin Fayulu. Mr Kabila and Mr Tshisekedi’s camps reject those allegations.

Mr Tshisekedi, wearing a blue suit and dark glasses, took the oath of office before his supporters, government officials and foreign ambassadors. However, in a sign of lingering doubts about the vote’s credibility, Kenya’s Uhuru Kenyatta was the only foreign head of state present.

Still, the imagery of one leader handing off the presidency to another as Mr Kabila wrapped the presidential sash around his successor was striking in a country where previous power transfers have resulted only from coups, assassination or rebellion.

Mr Fayulu said he won the election by a landslide, a claim backed by tallies from Congo’s Catholic Church, which deployed 40,000 observers to the polls.

He said on Thursday that he would never work with Mr Tshisekedi. “Felix has to start by telling the truth,” Mr Fayulu said. “He’s not the president-elect. He is the president appointed by Kabila.”

Mr Tshisekedi’s late father, Etienne, was one of Mr Kabila’s fiercest political rivals, losing to him in the 2011 presidential election. Supporters of his Union for Democracy and Social Progress (UDPS) party were among the dozens killed by security forces in protests in response to Mr Kabila’s refusal to step down on time.

At Thursday’s ceremony, UDPS supporters dressed all in white cheered soldiers as they marched along the palace lawn, and longtime political foes sat together in the tribune.

“I am happy today because Felix will change the country. He will give children free education and people food,” said Nsangaa Tshibula (39), whose white gown was decked in glittery beads.

But Mr Tshisekedi faces widespread suspicion outside the UDPS that his election win came through a secret deal with Kabila that will see the outgoing president continue to pull the strings behind the scenes.

Congolese sources in contact with senior government officials told Reuters that Mr Fayulu won the election decisively, but that top officials ordered the electoral commission to award the vote to Mr Tshisekedi after he struck a deal with Mr Kabila.

During his 18 years in power, Mr Kabila installed loyalists throughout the federal bureaucracy, and his ruling coalition won a resounding majority in legislative elections, meaning Mr Tshisekedi’s prime minister will come from its ranks.

Mr Kabila has refused to rule out a fresh run for president in 2023, when he will no longer be constrained by term limits.

That has left many Congolese wondering whether Mr Tshisekedi’s presidency will mark a meaningful break with the Kabila years, during which the economy grew at a healthy clip on the back of surging copper and cobalt production but failed to significantly dent endemic poverty.

Congo remains deeply unstable years after the official end of a 1998-2003 regional war in the eastern borderlands with Uganda, Rwanda and Burundi that led to millions of deaths, most from hunger and disease.

Dozens of militia continue to ravage those areas. Three days of ethnic violence last month in the normally peaceful west also killed nearly 900 people, according to the United Nations.

During the election campaign, Mr Tshisekedi vowed to move the government for at least three months to the city of Goma, on the border with Rwanda, in a bid to reassert state control over that part of the country.

But analysts say his perceived lack of legitimacy in some quarters after the disputed election could embolden armed challenges to his government. – Reuters