Laws may cut off US funds to Palestinian security agencies 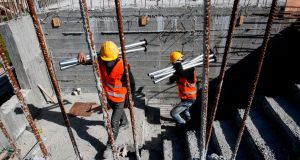 Construction workers at the site of a school funded by the US United States Agency for International Development in the Palestinian village of Al-Jabaa, 15km southwest of Bethlehem. Photograph: Hazem Bader/AFP

US funding for Palestinian security agencies could end next week when legislation goes into effect enabling US citizens whose relatives were killed or injured in Palestinian attacks to sue the Palestinian Authority.

Cases already before the courts could bankrupt the Palestinian Authority (PA), causing it to collapse, and intensify violence against Israelis.

“The government sent an official letter to the US administration requesting it stop all aid to the PA, including assistance to the Palestinian security services,” said senior Palestinian official Saeb Erekat. If it continued to accept the funding, the PA could be prosecuted in the US for “terrorism”.

Erekat said the end to funding would not “impact the role of the security services” but Palestinian sources argue the aid is essential for maintaining calm in the West Bank. Palestinian police suppress anti-PA dissidence in the West Bank while Palestinian intelligence agencies provide Israel with information on potential attacks.

US defence contractors deployed with Palestinian security forces have already left the West Bank while US humanitarian assistance has been abandoned, leaving schools, roads and water projects unfinished. The US development agency had provided $5.5 million to the Palestinians for health, educational and infrastructure projects.

The legislation adopted last year stipulates that any government receiving US funding is subject to US counterterrorism laws. The US and Israel contend the PA supports terrorism by providing pensions to families whose members have died or been imprisoned resisting the Israeli occupation.

Halting welfare payments would destroy whatever credibility is still enjoyed by the PA, which has failed to reach peace with Israel and establish a Palestinian state.

Even if relations are restored between the US and the PA – they were ruptured by Trump’s recognition of Jerusalem as Israel’s capital – the legislation could prevent future US financial assistance to the Palestinians.

Trump signed the legislation last October, even though he had supported the security programme since it benefits Israel. To maintain the funding he could either press Congress to amend the law or provide a waiver for Palestine. Preoccupied by the battle over the US government shutdown, neither the White House nor Congress have addressed this issue.

US financing and training of the Palestinian security services began in 1994 under the now defunct Oslo accords. Recruits were sent to the Jordanian Police Training Centre near Amman while a series of US generals presided over the programme.

Under the Oslo accords, the Palestinian Authority was meant to have full administrative and security control of 18 per cent of the West Bank, mainly its population centres, while Israel provided security for 82 per cent. The accord also called for Palestinian-Israeli security co-operation.

However, the arrangement has eroded. Since 2002, Israeli forces have regularly conducted raids to arrest Palestinians in areas under the Palestinian Authority, including Ramallah, the Palestinian administrative capital.

Israel’s policy has undermined the PA and left the Palestinian security apparatus with the unpopular job of suppressing opposition to the PA and countering Palestinian anti-occupation operations.