Two men jailed in Germany for decades of child abuse 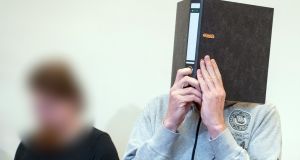 A German court has convicted two men for sexually abusing nearly three dozen children – the youngest just four years old – at a campsite over more than a decade.

The two men, identified in line with German privacy laws only as Andreas V (56) and Mario S (34), were sentenced on Thursday to 13 and 12 years in prison respectively – and indefinite detention after completing their prison terms.

“It’s difficult to put these acts into words,” said Justice Anke Grudda in the western German regional court in Detmold in her ruling. “You degraded 32 children and youths as objects of your sexual desires – you destroyed 32 childhoods.”

The words “monstrous” and “repulsive” were, she said, not strong enough to describe the depth of the convicted men’s depravity outlined in the 10-week trial.

The first abuse took place in 1998 in a permanent campsite in Lügde – an hour southwest of Hanover – and commenced again more intensively from 2008 until the end of last year.

Most abuse took place in the trailer of Andreas V, a welfare recipient, who was convicted of 223 counts of sexual abuse. His younger co-defendant, a painter and plasterer, was convicted on 48 counts.

Videos and pictures of their abuse were used against them in the trial, during which police said they had collated 32,000 home-made child pornographic files on the men’s computers.

Judge Grudda described as “perfidious” the men’s tactics: befriending single parents online to get closer to their children.

Then the men made the children emotionally dependent and vulnerable, bombarding them with outings to shopping centres, swimming pools or presents of mobile phones and laptops.

The younger convicted man gave children biscuits and ice cream in exchange for naked pictures and oral sex. Two of his victims, prosecutors said, had themselves become perpetrators.

Thursday’s convictions – effectively for a life-time in captivity – have not ended the case. German authorities are facing questions over why they didn’t intervene earlier. A state parliamentary inquiry has found that local police failed to respond to repeated parental complaints about the men.

During the criminal investigation, evidence and other material disappeared from police archives. Allegations about Andreas V’s paedophile tendencies, meanwhile, didn’t hinder welfare authorities from giving him a foster daughter, whom he used as a “sex object” and to lure others into his trailer. When the abuse was revealed, investigators found the case worker had manipulated and deleted files.

The men’s defence lawyers said they had decided not to lodge an appeal against the sentences.

Survivors and their families followed the verdict via video link in a separate room. “It’s in the stars whether they will ever come to terms with this,” said Ms Zehila Evlice, a survivor lawyer. “We have a lot of cases of self-harm, nightmares but now they have to try and live with this.”

Anti-child abuse campaigner Julia von Weiler said many survivors were “afraid to be recognised because the perpetrators distributed digital pictures and videos of the crimes”.