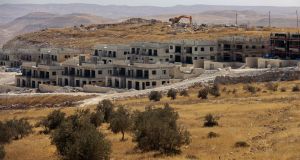 New housing construction in the Nokdim settlement in the Israeli occupied West Bank, south of the Palestinian city of Bethlehem, pictured in October 2020. Photograph: Getty Images

Israeli authorities made a major last-minute push this week to advance settlement construction in the occupied West Bank, which the Palestinians seek as part of a future independent state, in the twilight hours of the Trump administration.

The anti-settlement monitoring group Peace Now said the majority of the new government tenders, published on Tuesday, US president Donald Trump’s last full day in office, are deep inside the West Bank.

Israel accelerated settlement construction under Mr Trump, whose administration did not criticise settlement announcements and in 2018 said it did not consider settlements illegal under international law.

According to Peace Now, Israel approved or advanced construction of over 12,000 settlement homes in 2020, the highest number in a single year since it started recording in 2012.

Mr Biden is expected to reverse course and adopt the traditional US stance of opposing settlement constructions, setting the stage for tension with Israeli prime minister Benjamin Netanyahu.

“Our out-of-touch government leadership continues to press on with its mad scramble to promote as much settlement activity as possible until the last minutes before the change of the administration in Washington,” said Peace Now.

In the decades since, it has built dozens of settlements in the West Bank that most countries consider illegal under international law.

The Palestinians claim all of the West Bank as part of a future independent state.

They say Israel’s growing settler population, approaching some 500,000 people, is an impediment to peace. – PA