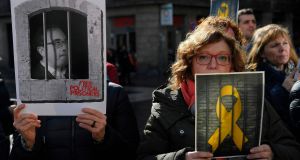 Spain’s foreign ministry announced this week it was preparing to launch a campaign that would explain to the world, with total transparency, the details, as they unfold, of the trial of Catalan independence leaders due to begin this month.

Irene Lozano, secretary of state for the ministry’s Global Spain department, is charged with the task, which she said will include countering a torrent of “fake news” produced by the Catalan independence movement.

“We realise how much is at stake and we have to do this right,” she told EFE news agency.

“It’s clear that they want to discredit our democracy and the Spanish state as much as they can.”

Lozano’s comments underline the expectations that this trial, the most politically explosive in modern Spanish history, has generated. They also reflect how divisive it is: while Spain’s government and other authorities insist it will be an exemplary demonstration of justice in action, pro-independence Catalans warn it will prove that the country’s judiciary is not fit for purpose.

Twelve prominent leaders of the Catalan independence movement will appear before the supreme court on February 12th. Among them is Oriol Junqueras, former vice-president of Catalonia, who could face a jail sentence of up to 25 years if found guilty of charges of rebellion and misuse of public funds presented by public prosecutors. Junqueras, along with the other defendants, is accused of organising an illegal attempt by the Catalan region to break away from Spain in the autumn of 2017, via an outlawed referendum and a unilateral declaration of independence.

The Catalan independence movement warns that the outcome of the trial is a foregone conclusion, because, it claims, the judiciary is controlled by unionist forces who are determined to punish not just an alleged violation of the law but Catalan nationalism as a whole.

“[This trial] is not against a crime, because no crime was committed,” said Alfred Bosch, the Catalan foreign minister. Instead, he added, it is “a political trial, a prosecution of pro-independence ideology”.

He points, for example, to the fact that nine defendants have been in preventive custody for months, even though the date of the trial has been unknown almost up until its commencement. Two of them, Jordi Sànchez and Jordi Cuixart, former leaders of the Catalan National Assembly (ANC) and Òmnium Cultural pro-independence organisations, respectively, have spent 15 months in jail. Amnesty International’s Spanish chapter has called on the duo to be freed and for rebellion and sedition charges against them to be dropped, although it has not endorsed the Catalan government’s charge that they and their jailed colleagues are “political prisoners”.

Another major bone of contention has been the charges themselves, particularly that of rebellion, which implies the use of violence, something the independence movement has always publicly rejected. Proving that Junqueras, Sànchez, Cuixart and others supervised or incited violent acts will be arguably the biggest challenge for the prosecution. With that aim, there is likely to be plenty of focus on street demonstrations in Barcelona several days before the 2017 referendum, when some police cars were vandalised and protesters allegedly prevented civil guards from leaving a government building.

Meanwhile, a string of recent controversies has undermined the image of the Spanish judiciary, just as its biggest test looms.

Among them was an unprecedented U-turn that the supreme court performed in November on a ruling to charge banks a mortgage tax, drawing accusations that the tribunal was under the thumb of the country’s financial powers. Weeks later, Manuel Marchena withdrew as candidate to head the judiciary’s governing body amid suggestions his appointment was politically driven. A leaked text message from a Popular Party (PP) senator said that Marchena would allow the conservatives, who are stridently unionist, to control the court “from behind the scenes”. Marchena, to the outrage of the defence, will preside the panel of seven magistrates handling the Catalonia trial.

These and other incidents have put the Spanish authorities on the back foot, forcing them to defend their judiciary.

“We want the independence and guarantees of the Spanish justice system to be known,” said Fernando Rodríguez Rey, a senior public attorney. “It is not ideologies that are put on trial, but rather concrete acts carried out by certain people who break the law.”

He and other officials have underlined the fact that the trial will be televised live to prevent distorted reports of proceedings. Meanwhile, the justice minister and supreme court judges have been briefing the foreign press on the trial, repeatedly underlining its credibility.

Even King Felipe has appeared to contribute to the counterattack against pro-independence propaganda, albeit indirectly. In early January, when addressing a room full of new judges, he said that a neutral judiciary was part of “a modern, advanced, fully democratic society, such as Spain”.

Those making such arguments can point to a 2018 sentence which condemned the systemic corruption of the PP and ultimately led to the party being ousted from government. Also last year, the king’s brother-in-law, Iñaki Urdangarin, was jailed for embezzlement – proof, many say, that all Spaniards are equal before the law.

Yet such examples will do little to convince the Catalan independence movement. Following months of divisions and often haphazard leadership, it sees the coming weeks as a chance to unite and mobilise in the face of what it is already flagging as a miscarriage of justice.

Many observers have seen this trial as an obstacle which has delayed the resolution of the Catalan crisis. But once the verdict is issued, in several months’ time, it may turn out to be yet another cause of conflict between Madrid and Catalonia.

HOW THE TRIALS WILL PROCEED

A total of 18 defendants will go on trial as part of the same case. Twelve of them will be tried by the supreme court in Madrid, including former Catalan vice-president Oriol Junqueras, former Catalan parliament speaker Carme Forcadell and several former ministers in the Catalan government, such as Jordi Turull and Joaquim Forn. The Catalan high court, in Barcelona, will try the other six on lesser charges.

The supreme court trial, which will begin on February 12th, is expected to last around three months, with a verdict likely to be issued either in the summer or autumn.

There are three plaintiffs in the case: the public prosecutor, the state lawyer and the hard-right political party Vox. The public prosecutor is bringing rebellion charges against nine defendants and requests a 25-year jail term for Junqueras and sentences ranging from seven to 17 years for the others on trial in the supreme court. The state lawyer is requesting less stringent sanctions, while Vox wants the former Catalan vice-president to be jailed for 74 years.

Former Catalan president Carles Puigdemont, who called the 2017 independence referendum, is not on trial. Having fled to Belgium, he has escaped the reach of the Spanish judiciary and the law does not allow him to be tried in his absence.

There are several other legal processes open in relation to the events of 2017 in Catalonia. Madrid’s Audiencia Nacional tribunal is due to begin preliminary proceedings against the former head of the Catalan police force, Josep Lluís Trapero, who is accused of failing to prevent the October 1st referendum from going ahead. Alongside him in the stand will be Pere Soler, the politician who supervised the police in Catalonia, as well as another politician and a senior police officer.

By contrast, legal action is also proceeding against Spanish police officers for their actions against voters on the day of the referendum. A total of 33 officers have been formally named in judicial investigations for alleged brutality as they attempted to stop Catalans voting.

“This is the case with the highest number of officers investigated for police brutality in the recent history of this country,” said Jaume Asens, an official from Barcelona city hall, which has brought the lawsuit against the police.