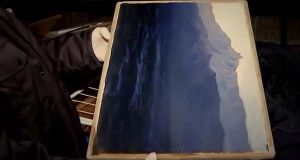 Authorities in Moscow have arrested a man suspected of a daring art heist at a leading Russian state-owned museum.

Police said they had found the 20th-century masterpiece Ai Petri. Crimea by the renowned Russian landscape painter Arkhip Kuindzhi at a building site outside Moscow after it vanished from an exhibition at the State Tretyakov Gallery on Sunday.

The painting of the Ai-Petri peak in the Crimean mountains was being shown at a highly popular retrospective of Kuindzhi’s works at the Tretyakov and its theft fast became a media sensation in Russia.

Surveillance video from the Tretyakov broadcast on Russian state television on Monday showed a man dressed in jeans and a black shirt sauntering out of an exhibition bearing a painting he had just removed from the gallery wall.

Visitors looked on, unaware they were witnessing the brazen theft of a valuable work of Russian art.

Within hours, armed police swooped on a flat in a village outside Moscow and arrested a 31-year-old man who informed them that the missing painting was hidden at a building site near the Russian capital.

A video published on Monday by the Russian interior ministry shows the suspect denying wrongdoing as he sits with his hands tied behind his back undergoing police interrogation. He said he could not remember where he had been the previous afternoon.

Police told the Tass news agency they had been summoned by the Tretyakov on Sunday to investigate the disappearance of a fur coat from the visitors’ cloakroom and only discovered that Ai Petri. Crimea had gone missing when inspecting the gallery’s surveillance videos.

Paintings of Crimea’s picturesque landscape have risen sharply in value since Russia annexed the Ukrainian Black Sea peninsula in 2014.

Investigators have not ruled out the possibility that the suspect – who had been on bail since last December for illegal drugs possession – was working with accomplices to steal Ai Petri. Crimea.

The incident raises fresh questions about security at the Tretyakov, where only last May a man attacked a painting of Tsar Ivan the Terrible with a metal rod, causing severe damage to the work considered one of Russia’s finest art treasures.

However, the Kremlin praised the police on Monday for their swift action in recovering the stolen Kuindzhi landscape. “Thank God that thanks to the energetic work of our law enforcers, the painting was found and found quickly and promptly,” said Dmitry Peskov, press spokesman for Vladimir Putin. “Don’t forget that such incidents happen in every country in the world and art thieves are far from always so swiftly found.”

The Tretyakov Gallery said Ai Petri. Crimea – which was on loan from its permanent home at Saint Petersburg’s Russian Museum – had not been damaged during the incident.