More than 250 people were killed, including many civilians, after armed forces tried to seize power

President Recep Tayyip Erdogan warned coup supporters that “they will pay a heavy price for their treason to Turkey”. Erdogan served as Prime Minister from 2003 to 2013 and President since. Video: Reuters 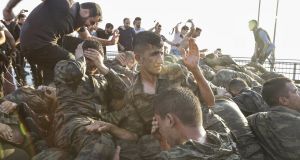 Below is a timeline of breaking events in Turkey.

- Access to Facebook, Twitter and YouTube is restricted in Turkey, shortly after news broke that a military coup may be under way, according to two internet monitoring groups. The news is quickly reported around the world.

-A soldier is filmed telling passers-by: “It’s a coup, go home.” Chaos breaks out on Istanbul’s main thoroughfare, Istiklal, with people running in all directions, and restaurants and shops closing.

-The Turkish military release a statement through state media that declares a coup is under way in the country. It is answered quickly by sources close to the elected president, Recep Tayyip Erdogan, who insist that the attempt has failed and his government remains in power.

- A spokesman for the presidency confirms there has been an attempted coup by “a group within the armed forces”, but says it will fail and those involved will be punished.

-Gunshots are heard in the capital, Ankara, as military planes fly low and fast overhead. Tanks open fire near the Turkish parliament building, Reuters reports, following similar reports from NTV and local journalists about gunfire in Ankara and Istanbul.

-In a statement released through Turkish television channels, people claiming to speak for the Turkish military say the army has taken charge of the country and declare Erdogan’s government has eroded Turkey’s secular traditions. They claim the country is now being governed by a “peace council”.

- In response a spokesman for Erdogan says the coup is supported by only a faction of the army and that he is still in command of the country.

-Some two hours after the military begins to make its move, Erdogan finally reaches Turkish television studios via FaceTime and calls on Turks – some 49.5 per cent of whom voted for his party in November 2015 – to respond to the coup by rallying in public. “I urge the Turkish people to convene at public squares and airports,” Erdogan says. “There is no power higher than the power of the people,” he continues, adding that the judiciary “will swiftly respond to this attack”.

- An official says Erdogan is “safe” and speaking from Marmaris, a Mediterranean resort town where he is said to be on holiday. An eyewitness told the BBC of hearing helicopters and gunfire overnight in Marmaris, and Erdogan also claims in a later press conference the town was attacked.

- Members of the military declare a curfew across parts of the country, television channels report. Some Turks rush to stockpile food and water, and withdraw cash from banks, amid fears of a potential administrative meltdown in the coming days.

- Large crowds gather in opposition to the armed forces and there are unconfirmed local reports of fighting in Ankara and Istanbul. Casualties are reported.

Erdogan blames the coup on factions loyal to dissident Fethullah Gülen, a US-based Turkish cleric who is a former ally turned prominent critic of his home country’s president.

- Gülen, who lives in exile in Pennsylvania, strenuously denies any involvement in the coup. The cleric, who heads the Hizmet movement, is an influential figures among Turks at home and abroad, frequently accused by Erdogan of trying to destabilise his government.

- The military’s grip on key civil institutions, including major transport hubs and media organisations, appears less strong than reported earlier in the coup.

- A furious Erdogan arrives at Istanbul’s Ataturk airport and declares his government remains in charge. The president vows to round up and punish those behind the military revolt, as his government announces hundreds of people have been arrested on suspicion of involvement, including senior colonels and generals.

- Coup leaders continue to put up a defiant front, with anti-government groups claiming there are still pockets of resistance around the country.

- Video footage emerges of soldiers leaving their positions or being taken away under arrest, with one large contingent abandoning their blockade of Istanbul’s Bosphorus bridge, hands raised in surrender.

- Local reports claim at least 60 people have been killed, many of them civilians. Sixteen people involved in the attempted coup died in clashes at military police command, and 250 others were arrested, according to reports. Separately, 13 soldiers who tried to storm the presidential palace in Ankara were arrested.

- The head of the armed forces, General Hulusi Akar, is reportedly freed, having been taken hostage earlier in the military revolt.

- More than 1,500 members of the armed forces have been arrested, among them 29 colonels and five generals, the government announces. Rear Admiral Nejat Atilla Demirhan and General Memduh Hakbilen, the chief of staff of Turkey’s command for the Aegean region, are said to be among those detained.

- Turkish prime minister Binali Yildirim calls the night’s events a “black stain” on Turkish democracy and praises the role of civilians and the police in putting down the coup. He says 161 people have been killed and more than 1,440 injured, with 2,839 military personnel arrested.

- Eight men land in a Turkish military helicopter in the Greek city of Alexandroupolis and attempt to claim political asylum, Greek police sources said. Turkey’s foreign minister tweeted a demand for their return.

- An anti-government group took over a frigate in the naval base of Gölcük and held the head of the Turkish fleet hostage, a Greek military source told Reuters.

- The post-coup crackdown spreads beyond the military as Turkish media reported that 2,745 judges have been removed from duty. Five members of HSYK, Turkey’s highest judiciary board, were also removed, state-run Anadolu Agency reports.

- Gülen, the cleric blamed by Erdogan for leading the failed coup, denies any involvement in the uprising. A statement released by Reuters says he “categorically denies” the claims that he orchestrated the coup, and argues power should be won through free and fair elections.

- Turkish opposition leader Kemal Kilicdaroglu, of the Republican People’s party (CHP), criticises the coup attempt and says that political parties should take a “joint stand” against such attempts.