Coronavirus: WHO head warns without national unity ‘worst is ahead of us’

The director general of the World Health Organisation, Dr Tedros Adhanom Ghebreyesus, has warned that without national unity and global solidarity the worst of the Covid-19 pandemic may yet lie ahead. Video: WHO 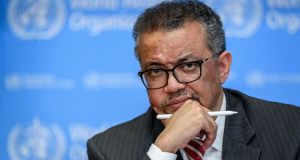 World Health Organisation director-general Tedros Adhanom Ghebreyesus: ‘This is a devil that everybody should fight.’ File photograph: Fabrice Coffrini/AFP via Getty Images

The head of the World Health Organisation has warned that “without national unity... the worst is yet ahead of us” in the coronavirus outbreak, reviving the alarm just as many countries ease restrictive measures aimed at reducing its spread.

Director-general Tedros Adhanom Ghebreyesus told reporters from WHO headquarters in Geneva “this is a devil that everybody should fight”.

“We need global solidarity that’s cemented on genuine national unity. Without the two ... trust us, the worst is yet ahead of us. Let’s prevent this tragedy. It’s a virus that many people still don’t understand.”

Some Asian and European governments have gradually eased or started relaxing lockdown measures such as quarantines, school and business closures and restrictions on public gatherings, citing a decline in the growth of Covid-19 case counts and deaths.

Mr Tedros and his agency have been on the defensive after US president Donald Trump last week ordered a halt to US funding for the agency, alleging that it botched the early response to the outbreak.

Among other things, Mr Trump insisted the WHO had failed to adequately share “in a timely and transparent” way information about the outbreak after it erupted in China late last year.

Mr Tedros said: “There is no secret in WHO because keeping things confidential or secret is dangerous. It’s a health issue.

“This virus is dangerous. It exploits cracks between us when we have differences.”

He said US Centres for Disease Control and Prevention staff have been seconded to work with his agency, suggesting that was a sign of the WHO’s transparency.

“Having CDC staff means there is nothing hidden from the US from day one” Mr Tedros said. “Our CDC colleagues also know that we give information immediately to anyone.”

France on Monday officially registered more than 20,000 deaths from coronavirus, becoming the fourth country to pass that threshold after Italy, Spain and the US.

“The epidemic is very deadly and is far from over,” France’s public health chief Jérôme Salomon told a news briefing, adding that the death toll was now higher than that of the heat wave in the summer of 2003.

He said the number of people in intensive care had fallen for the 12th consecutive day, to 5,683 – the lowest since March 31st – suggesting the national lockdown is having positive effects in containing the disease.

Another encouraging signal was a decline for the sixth day in a row in people hospitalised for Covid-19, even though the total, at 30,584 versus 30,610 on Sunday, is going down only slowly.

While France is due to start unwinding some confinement measures from May 11th, Salomon insisted on the importance of strictly complying with the lockdown.

The UK reported a further 449 deaths in hospitals on Monday as the number of confirmed cases passed 124,000.

A total of 16,509 people who tested positive for coronavirus have died in hospitals in the UK, the health ministry said on Monday.

The number of confirmed cases of the new coronavirus has risen to 124,743.

In Spain, the number of people diagnosed with the virus, also known as Covid-19, surpassed the 200,000 threshold, the country’s health ministry said on Monday.

Deaths from the epidemic in Italy rose by 454 on Monday, slightly up on Sunday’s tally, while the number of new cases dropped to 2,256, the lowest level in well over a month, the Civil Protection Agency said. The total death toll since the outbreak came to light on February 21st rose to 24,114.

Germany, which has suffered comparitively few deaths at 4,500, began to ease restrictions with shops up to 800sq m, as well as car and bicycle dealers and book stores opening on Monday.

Chancellor Angela Merkel urged caution before taking another step out of lockdown. “We have achieved a lot, but we haven’t yet reached our target,” Dr Merkel said on Monday after a meeting of her government’s coronavirus crisis cabinet. “It would be a crying shame if we would need to roll this back.”

Meanwhile in the US, coronavirus deaths topped 41,000 on Monday, according to a Reuters tally, as more protesters gathered in state capitals to demand an early end to the lockdown.

Dr Anthony Fauci, the director of the National Institute for Allergy and Infectious Disease, pushed back against the protests saying the US economy would not recover until the virus was “under control”.

“Unless we get the virus under control, the real recovery economically is not going to happen,” Mr Fauci said. “So what you do if you jump the gun and go into a situation where you have a big spike, you’re going to set yourself back.”

US president Donald Trump had expressed support for the protesters in tweets at the weekend.

The number of people with Covid-19 in Canada is trending in the right direction but strict physical distancing will need to stay in place, prime minister Justin Trudeau said on Sunday.

Russian president Vladimir Putin said the country had managed to slow the spread of thevirus but warned the peak of the outbreak still lay ahead after the number of confirmed infections surged past 47,000 nationwide on Monday.

Mexico has registered a total of 8,261 confirmed coronavirus cases and 686 deaths as of Sunday.

Brazil’s president Jair Bolsonaro again attended a public rally and attacked lockdown measures. He said on Monday he hoped this would be the last week of stay-at-home measures. – Agencies