Genoa moves beyond tragedy as new bridge close to completion 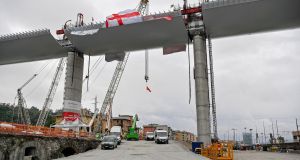 Italian flags are placed on the central span of Genoa’s new highway bridge after it was hoisted into position. Photograph: Fabio Ferrari/LaPresse/AP

On the 14th day of each month, the relatives of some of those who died in the collapse of Genoa’s Morandi bridge tie flowers to railings close to the site of the disaster.

“We live in different places, and so haven’t always managed to get there every month,” said Egle Possetti, whose sister, brother-in-law, niece and nephew were among the 43 killed on August 14th, 2018. “But there’s a woman in Genoa who brings flowers on behalf of all of us.”

Only March was skipped, owing to Italy going into the coronavirus lockdown, while on April 14th the woman who brings the flowers did so wearing a face mask.

The tribute has brought a regular reminder of the tragedy to the team of more than 500 building a new bridge in the coastal city, who on Tuesday inaugurated the structure in a ceremony led by the Italian prime minister, Giuseppe Conte, after the last 44m span was hoisted into place. It is expected to open to traffic in July.

Work on the site continued during the peak of the pandemic, albeit under strict safety regulations, on what is considered a strategic commercial project linking Italy to France. Construction had begun in earnest in August 2019 shortly after what remained of the bridge was demolished. Its completion provides a rare moment of hope in a country where nearly 27,000 have died of the coronavirus.

“Genoa is a model for Italy,” Mr Conte said on Tuesday. “And it teaches us that the greatest act of love is when we commit to restarting together. Genoa radiates a light that gives hope to the whole of Italy.”

Drawings for the new bridge were donated by Renzo Piano, the Genoa-born architect who designed the Shard in London. Piano’s design for the structure, stretching 1km across the Polcevera valley, includes solar panels mounted along each side to generate electricity needed to power its lights and sensors.

Experts and residents had for decades had concerns over the safety of its predecessor before its collapse, and the new bridge’s safety and durability has been prioritised, with robots deployed to inspect its solidity and conduct regular maintenance.

“Since construction began, we have been working day and night. The only day the site closed was on Christmas Day,” said Stefano Mosconi, the site construction manager, when the Guardian visited in late February. “It has been emotional for everyone to be working on a project that is so important, also because we share a sense of responsibility linked to building something that will replace something that is not there any more, and which had very tragic consequences.”

Pietro Salini, the chief executive of Salini Impregilo, which is building the new bridge in a joint venture with Fincantieri Infrastructure, compared the construction team’s dedication to that of a national football squad.

“Everyone is unified,” he said. “For the victims but also out of respect for Genoa. People keep asking, ‘How is it possible that in only a few months you did most of the bridge?’ They say it’s a miracle – it’s not a miracle, it’s the work of human beings, men and women, using their hands.”

He said Italy should seize the opportunity to revive stalled infrastructure projects and ensure proper maintenance of existing roads and bridges.

“Italians have the luxury of living in a country where roads and buildings with stones and marble are still in use after centuries, giving the false impression that infrastructure lasts forever,” he added. “Most of Europe still relies to some extent on infrastructure built in the 19th century. There is a big need for renewal, let alone maintenance. After the collapse of the Morandi bridge, Italians woke up to the realisation that something has to be done to avoid another disaster of this kind.”

The new structure restores a crucial route for commercial trade between Italy and France, but the Morandi bridge, built in the 1960s, was also essential for serving Genoa’s port as well as for residents crossing from one side of the city to another and holidaymakers making their way to the mountains or Mediterranean beaches.

Marco Bucci, the mayor of Genoa and commissioner for the project, said the bridge’s absence had been costing the city an estimated €6 million a day. Genoa’s administration quickly cut through Italy’s notorious red tape to get work started.

“The tragedy was a tragedy but straight away we saw it as an opportunity to roll up our sleeves, work hard and make sure the city gets new momentum,” said Bucci. “This is why, for us, the bridge is not only a bridge but a way to demonstrate to Italy and the world that good things can be done here.”

Bucci said he was in regular contact with the families of the victims, and a memorial site is planned. “Every time we do something around the project we ask their opinion, as we need to respect the opinion of the relatives of the people who died.”

However, the new bridge is providing little comfort to the families of the dead awaiting the outcome of inquiries by prosecutors. Several executives of Atlantia, whose road tolls unit, Autostrade, was responsible for operating and maintaining the Morandi bridge, are still being investigated for manslaughter. Atlantia has denied any wrongdoing and said it always acted in compliance with its obligations.

“In some ways seeing a new bridge being built so quickly is worse for us,” said Possetti, who is president of the committee for remembering the victims of the Morandi bridge. “As the old bridge should have been demolished long before it collapsed and killed so many people. It was no longer capable of standing up.” – Guardian