Switzerland set to back compromise deal on EU migrants

In case with similarities to Brexit, MPs water down plan to impose limit on EU migrants 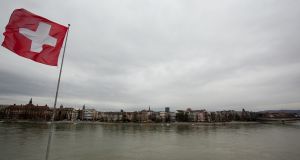 A Swiss flag at the Rhine River in Basel, Switzerland. Nearly a quarter of Switzerland’s 8.3 million residents are non-Swiss while another 350,000 more EU citizens commute into Switzerland from neighbouring Italy, Germany and France. Photograph: Michele Tantussi/Getty Images

Nearly three years after the Swiss voted narrowly to impose limits on immigration from the rest of Europe, MPs in Bern are set to back a compromise on Friday which they hope will salvage bilateral relations with the EU.

As Britain’s EU partners wait for London’s plan to withdraw from the union and reconfigure bilateral ties, it’s instructive to see just how little the Swiss compromise resembles the February 2014 proposal.

That successful vote, pushed by the populist Swiss People’s Party (SVP), ordered Swiss politicians to impose an upper limit on immigration from EU countries. Shell-shocked establishment parties, who had campaigned against the initiative, vowed to respect the will of the Swiss people. But when they turned to Brussels, they were given a brusque response.

Echoing this year’s post-Brexit rhetoric, EU officials said Switzerland could not cherry-pick fundamental rights – such as freedom of movement – and still expect full access to the single market.

Trying to do so, Brussels warned, would collapse all existing agreements that Switzerland, a non-EU member, has with the bloc, by far Switzerland’s largest trading partner.

In the years since, Swiss legal eagles have attempted to square the circle: find a legislative solution that reflects the spirit of the 2014 vote, without jeopardising its EU relationship and endangering the export-dependent Swiss economy.

The declawed proposal likely to pass the Swiss parliament on Friday has dispensed with the 2014 initiative’s core demand: a quota system for non-Swiss immigrant job seekers. The final deal, instead of retooling inward migration, obliges Swiss employers to give unemployed domestic employees preference over EU nationals for jobs in Switzerland.

Employers will face a 40,000 franc (€7,260) fine unless they advertise vacant positions with state job centres and invite selected Swiss candidates for an interview. This obligation will, however, only apply in professions, sectors or regions where unemployment is above average.

An earlier proposal – for employers to explain why they refused a Swiss candidate – has been abandoned. Regional politicians have been given the power to propose further measures if those agreed on Friday prove ineffectual.

The new legislation increases pressure on EU citizens living in Switzerland. If they lose their job within their first year in the country, they have six months to find another or leave.

And lawmakers may tighten up the work and residency permit system: reserving permanent “C” residency permits only for those who can demonstrate they speak one of Switzerland’s four national languages, respect public order and adhere to Swiss national values, such as respecting gender equality.

Nearly a quarter of Switzerland’s 8.3 million residents are non-Swiss while another 350,000 more EU citizens commute into Switzerland from neighbouring Italy, Germany and France.

Even after Friday’s vote, Swiss officials admit they still don’t know if the EU will accept the compromise. And matters could be complicated further if a fresh initiative forces another vote on the final agreement. Meanwhile the Swiss People’s Party has threatened a referendum asking Swiss voters if their decisions should, in future, take precedence over foreign treaties.