Brexit impact may be worse for State than UK, report suggests

Michael Noonan says bilateral deal with UK, urged by House of Lords, is not possible 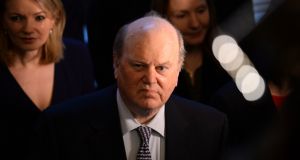 Minister for Finance Michael Noonan said it was not possible to do deals “on the side”. Photograph: Dara Mac Dónaill/The Irish Times

Brexit may have greater financial implications for the Republic of Ireland than the United Kingdom, a report by members of the House of Lords has warned.

The report says the result of the referendum on the UK leaving the European Union would have profound and unique consequences for the whole island of Ireland. It says the agricultural and manufacturing sectors and the SMEs would be worst affected.

The report, published on Monday, insists the current movement of people, goods and services between the North and Republic must be maintained.

It concludes the only way to prevent a hard Border being introduced and to ensure the current situation prevails is for the UK to remain in the customs union or for the EU to allow a bilateral UK-Irish agreement on trade and customs.

Responding to the report, Minister for Finance Michael Noonan said it was not possible to do deals “on the side”.

He said the negotiations have to take place between the European Union and the British authorities but that the report was very important in highlighting the would-be implications for Ireland.

“The British government from the prime minister down have a very good knowledge of what we see as the main concerns on the island for Ireland, on the trade across the Irish Sea in both directions and on what subsequent relations there may be with the European Union,” Mr Noonan said.

The report warns there is a serious threat posed by Brexit to the peace process in Northern Ireland.

The 70-page document was compiled by the House of Lords’ European Affairs committee and is one of six they are due to publish.

The report says the EU has a strong interest in supporting Ireland’sinterests in particular upholding the peace process.

The burden has fallen on the Government in Ireland but the committee found the primary responsibility to finding solutions lay with their counterparts in the UK.

“Ireland now faces challenges that are not of its own making. Closer UK-Irish relations and stability in Northern Ireland are too important to be put at risk as collateral damage of the Brexit decision,” the report says.

“In an era of blossoming bilateral relationships, after long years of mistrust and misunderstanding, we urge the UK government to be sensitive to the implications of its actions for the people and communities of Ireland, North and South . . . Anything less would diminish the efforts of all those who have worked so hard for peace and good relations across these islands.”