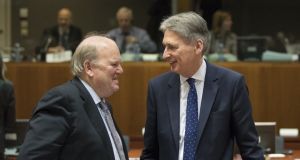 Britain’s chancellor of the exchequer, Philip Hammond, has backed a transitional arrangement between the UK and the EU after Brexit in order to avoid financial instability.

Mr Hammond told the House of Commons Treasury Committee that “thoughtful politicians”, as well as civil servants and business people, saw the need for an adjustment period longer than the two years of withdrawal negotiations under article 50 of the Lisbon Treaty.

“There is an emerging view among business, regulators and thoughtful politicians as well as a universal view among civil servants, that having a longer period to manage the adjustment would be generally helpful,” he said. “An adjustment period would run fewer risks of disruption, including risks to financial stability. We want transition arrangements to be discussed early in the negotiating process.”

Mr Hammond said that any transitional arrangement would have to be seen as mutually beneficial to Britain and the EU. But he suggested that politicians may not appreciate the implications for business and the civil service of an abrupt Brexit, citing the consequences of leaving the customs union.

“ We are talking about, in EU trade, perhaps five times as many submissions and inspections being required. It could certainly add hundreds of millions of pounds to the cost of operating the customs services,” he said.

Brexit secretary David Davis has sounded more sceptical about the idea of a transitional arrangement. However, in a report to be published on Tuesday, the House of Lords EU internal market and external affairs subcommittees said it would be impossible for Britain to negotiate new trade agreements within the two years of negotiations.

“It is unlikely that a bespoke EU trade agreement can be agreed within article 50’s two-year period, so a transitional deal is vital for protecting UK trade and jobs that rely on trade,” said Sandip Verma, chairman of the EU external affairs subcommittee.

“Those who support the report have succumbed to Dublin propaganda that is driven by a well-founded fear that once the comfort blanket of the UK leaving the EU is removed, the Republic will be on its own facing significant EU bills that it is unable to pay,” he said.

“What is more, its trade, the vast majority of which is with the GB and NI, will be subject to a new trade deal. Such a new trade deal will be in NI and GB interests, and Dublin will be on the back foot. Little wonder there is pandemonium in Dublin about Brexit.”