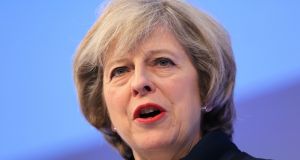 The British government should give an immediate unilateral undertaking to safeguard the EU citizenship rights of all European Union nationals in the UK after Brexit, the House of Lords EU Committee says in a report to be published on Wednesday.

If these rights are not protected, the committee warns that EU citizens living in the UK, and UK citizens living abroad, will face “severe” consequences. Theresa May has ruled out offering a guarantee that EU citizens now living in Britain will be allowed to remain after Brexit until she receives an equivalent commitment from the EU about the rights of British citizens in other member states. But Helena Kennedy, who chairs the Lords EU justice subcommittee, says that a unilateral guarantee on the part of Britain would stimulate reciprocal action from the rest of the EU.

“For the last six months, the lives of EU citizens living in the UK and UK citizens living in the EU have been shrouded in anxiety. Their rights to live, work and reside in their country of choice are now so unclear that people have no idea how, or even where, they should plan their futures,” she says. “Most shockingly, the rise in xenophobic behaviour since the referendum has now meant that EU citizens who have contributed to the UK economy for years no longer feel welcome in the country they call home. We find that unacceptable.”

There was speculation before the referendum that EU rights would be protected as “acquired rights”, meaning that they would continue irrespective of Britain’s withdrawal from the EU.

The report concludes, however, that this is not the case and that the doctrine of acquired rights in international law is unlikely to provide meaningful protection against the loss of EU rights upon Brexit.

The report says that Britain should seek to protect the full scope of EU citizenship rights – including the right to live, work, study and have a family in their adopted country – for EU citizens now in the EU and for British citizens in the EU in the withdrawal agreement.

Meanwhile, the Institute for Government is to warn on Wednesday that the secrecy surrounding Britain’s approach to the article 50 negotiations is hampering civil servants as they seek to prepare for Brexit.

The institute says the government needs to decide how it will run the negotiations, ensure that departments are doing sufficient planning, and put in place sufficient staffing and money for both Brexit and existing commitments.

“We are rapidly approaching the triggering of article 50, but our research shows that the civil service still doesn’t have what it needs – in terms of money, staff and information – to enable politicians to get the best deal for the country,” says Hannah White, director of research at the institute.

“This is not about revealing whether we are heading towards a hard, soft or grey Brexit. This is about being ready for the negotiations, and getting ready for life after Brexit. We know the civil service has the skill to do this, now it needs clear direction from Number 10.”

1 Covid-19: One death and 363 further cases confirmed in State
2 US election: Everything you need to know about Tuesday’s presidential debate
3 Ireland will not be Brexit ‘collateral damage’, says Coveney in Washington
4 ‘Insane’ gathering of hundreds of students in Galway condemned
5 Speed and distance of Covid-19 droplets tracked by Mater researchers
Real news has value SUBSCRIBE