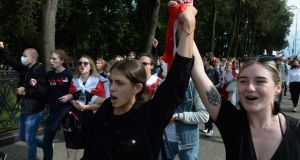 Thousands of students have rallied in Belarus to demand the resignation of its president, Alexander Lukashenko, as he called for an end to protests that he blames on western “meddling” and hailed his country’s close ties with Russia.

Young Belarusians marched through their capital, Minsk, and other cities on the first day of the academic year, and dozens were detained by riot police whose brutality towards peaceful demonstrators earlier this month was denounced by United Nations human rights experts on Tuesday.

During a visit to a school, the former Soviet state farm boss called for more patriotic education and urged pupils not to be misled by the “virtual world” of the internet – where his opponents plan rallies and independent media portray events very differently to state-controlled news outlets.

“Some of our people have fallen into that illusory world,” he said, while insisting that a turbulent summer for Belarus was over: “It’s time for everyone to get to work.”

Mr Lukashenko (66) refuses to negotiate with protest leaders, despite hundreds of thousands of people taking to the streets to reject his claim to have won an August 9th election, and to condemn a police crackdown on subsequent rallies in which at least three people died, hundreds were injured and some 7,000 detained.

UN human rights experts called for an investigation after receiving what they said were “reports of 450 documented cases of torture and ill-treatment of people” detained during the demonstrations.

Facing the biggest crisis of his 26-year rule, Mr Lukashenko has sought to portray the upheaval as a western-led plot to oust him and rob Russia of a vital ally.

He has accused neighbouring Poland and Lithuania of posing a military threat to his country, and secured a pledge from Moscow to help defend his country and to send Russian police into Belarus to quash protests if they turn violent.

“What I’m most concerned about is not [retaining] power,” Mr Lukashenko said. “I don’t want my country . . . to be cut into pieces, or for the honest, decent people who worked on it to be slaughtered.”

Praising a relationship that was badly strained before the election, he described Belarus and Russia as “brothers” whose shared “fatherland” stretched from Brest on his country’s border with Poland to Vladivostok on Russia’s Pacific coast.