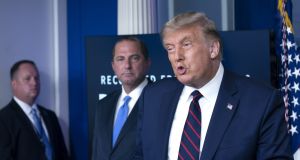 US president Donald Trump said a coronavirus treatment that involves blood plasma donated by people who’ve recovered from the disease will be expanded to many more sick Americans after the FDA approved use of the therapy. Photographer: Stefani Reynolds/Bloomberg

US President Donald Trump on Sunday hailed FDA authorisation of a coronavirus treatment that uses blood plasma from recovered patients, a day after accusing the agency of impeding the rollout of vaccines and therapeutics for political reasons.

The US Food & Drug Administration (FDA) announcement of its “emergency use authorisation” of the treatment came on the eve of the Republican National Convention, where Mr Trump will be nominated to lead his party for four more years.

“This is what I’ve been looking to do for a long time,” Mr Trump told an unusually brief White House news conference. “Today I’m pleased to make a truly historic announcement in our battle against the China virus that will save countless lives.”

The FDA, explaining its decision, cited early evidence suggesting blood plasma can decrease mortality and improve the health of patients when administered in the first three days of their hospitalisation.

The agency also said it determined this was a safe approach in an analysis of 20,000 patients who received the treatment. So far, 70,000 patients have been treated using blood plasma, the FDA said.

“It appeared that the product is safe and we’re comfortable with that and we continue to see no concerning safety signals,” Peter Marks, director of the FDA’s Centre for Biologics Evaluation and Research, told reporters in a conference call.

A day before the FDA’s announcement, Mr Trump tagged the agency’s Commissioner Stephen Hahn in a Twitter post in which he said, “The deep state, or whoever, over at the FDA is making it very difficult for drug companies to get people in order to test the vaccines and therapeutics.” “Obviously, they are hoping to delay the answer until after November 3rd. Must focus on speed, and saving lives!”

Mr Trump is looking to boost his lagging poll numbers during the Republican convention this week, and progress in treatments or an effective vaccine to gain control of the virus would aid his re-election chances.

Michael Steele, who served as chairman of the Republican National Committee from 2009 to 2011, said the Trump administration was putting politics ahead of science.

“This is not about good science or even your health, it’s about his re-election,” Steele wrote on Twitter.

Plasma is the element of blood that carries water, enzymes and blood cells throughout the body. It also carries the antibodies humans form to fight off disease and boost immunity.

Covid-19 patients have been receiving convalescent plasma for several months through clinical trials at medical centres such as New York’s Mount Sinai Hospital and Johns Hopkins.

Supplies of plasma are limited because they require that a recovered Covid-19 patient donate blood and that it matches the blood type of the recipient. Reuters reported that Covid-19 plasma supplies are dwindling, with the American Red Cross saying its stockpile of plasma for patients declined 70 per cent in July.

US regulators provided emergency authorization for Gilead Science Inc’s remdesivir as a therapeutic treatment for the virus earlier this year. Reuters reported that a senior administration official said therapeutic drugs that are being studied specifically for Covid-19 could be authorised for use and making doses by fall.

The White House declined to comment on a separate report in the Financial Times that the administration is considering fast-tracking an experimental Covid-19 vaccine being developed by AstraZeneca Plc and Oxford University for use in the United States ahead of the November 3rd elections.

One option being explored would involve the FDA awarding emergency use authorisation in October to the potential vaccine, which was developed by Oxford and licensed to AstraZeneca, the FT reported citing people briefed on the plan.

A spokeswoman for AstraZeneca denied the company had discussed an emergency use authorisation for its potential vaccine with the US government and said it would be premature to speculate on that possibility.

The company said the late-stage Phase 2 and Phase 3 trials for its vaccine candidate are still ongoing in Britain and other markets globally and that it did not anticipate efficacy results until later this year.

There are no approved vaccines for Covid-19, but AstraZeneca’s shot, called AZD1222, is widely seen as one of the leading candidates. –Reuters