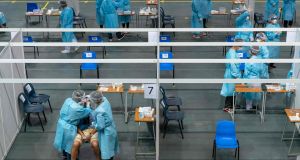 Medical workers collect samples from a man at a makeshift testing site for Covid-19 at the Queen Elizabeth Stadium in Hong Kong on Tuesday. Photograph: Anthony Kwan/POOL/AFP via Getty Images

Hong Kong’s attempt to launch mass testing for coronavirus has morphed into a public vote on the government’s legitimacy after opposition politicians called on the public to boycott the programme.

The Beijing-backed plan to test at least 5m of the territory’s 7.5m people began on Tuesday but has reignited tension and distrust in the authorities following more than a year of social unrest.

More than 550,000 people have signed up for the testing but many in the city are reluctant to follow suit because of fears over privacy and doubts over the initiative’s efficacy.

The involvement of mainland Chinese testing companies and Chinese medical staff has stoked fears that personal data will be shared with the mainland.

Those fears have been heightened in the wake of a sweeping national security law, introduced unilaterally by Beijing in July, that criminalises virtually all forms of dissent in the city.

Credible accounts of widespread DNA collection by the Chinese security apparatus in Xinjiang, where up to 2m Uighurs and other Muslims have been detained in re-education camps, have added to the concern.

The Hong Kong government has insisted that all personal details and specimens would be kept in the city.

Joshua Wong, the pro-democracy activist, is among the opposition figures who have criticised the testing campaign. He pointed out that the government delayed the legislative elections over fears that busy polling stations could help spread the virus, while simultaneously asking residents to queue up to be tested for coronavirus.

Hong Kong media have reported that more than half of the 141 sample collection centres set up for the testing programme were used as polling stations in the city’s past two elections.

In a series of Facebook posts, Wong repeated claims that residents’ DNA would be sent to China.

The Hospital Authority Employees Alliance, representing thousands of the city’s hospital staff, called on the general public to boycott the mass testing. The group said the scheme would only be effective with a “complete lockdown and stay-at-home order”.

Yuki Pao (26) said she would not take part in the programme, owing to suspicion over the involvement of mainland Chinese companies and after local experts questioned whether the initiative would be effective in controlling the outbreak.

“If people have early flu symptoms, they will voluntarily go to clinics and hospitals. I don’t see the need of a healthy individual getting tests done,” she said. “I don’t trust the Chinese so-called professionals and Chinese labs. I won’t be taking part because I don’t want my DNA to be sent to China.”

However, opposition to the scheme is not universal.

“Just spend a few minutes to do the test then you will be at ease,” said Johnny Tam, a 67-year-old retired architect, as he and his wife walked out of a sports ground that was turned into a testing centre. He said those who worried about privacy were too “sensitive”.

The Hong Kong initiative is voluntary but otherwise mirrors policies in mainland China. Mass compulsory testing programmes have been launched in cities hit by virus outbreaks over the summer, including Beijing and Dalian.

Hong Kong authorities and some experts believe mass testing will help contain the virus by identifying asymptomatic patients. They argue that testing is essential if authorities are going to relax social-distancing measures to restart the economy.

Other experts in the city have questioned the usefulness of the scheme. In a recent radio programme Ho Pak-Leung, a microbiologist at the University of Hong Kong, likened mass testing to “wasting bullets”. He recommended that testing should be focused on high-risk groups.

The mass testing programme was announced after the city experienced a “third wave” of infections starting in July, after its early success in containing the virus. The city’s total caseload since the start of the pandemic stands at more than 4,800, with 89 deaths. The number of daily cases has since dwindled to single digits. – Copyright The Financial Times Limited 2020