Statute to rein in far-rightist remarks proposed in Germany 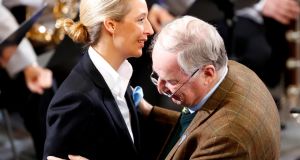 Moderates in Germany’s far-right Alternative für Deutschland have proposed a new codex to rein in politicians’ public remarks in a bid to avoid coming under domestic intelligence scrutiny.

An internal party paper urges officials – who deny their party is racist or xenophobic – to “refrain from blanket defamation of foreigners/immigrants/refugees”.

In addition the party says the religious freedom of Muslims “is not to be called into question” nor are “all Muslims to be portrayed as a potential danger for society”.

The debate within the party over its identity and rhetoric comes as co-leader Alice Weidel faces questions over donations for her Bundestag campaign last year.

One donation, €130,000 from Switzerland in individual tranches of 9,000 Swiss francs transferred between July and September 2017, was most likely illegal. Questions also surround a second €49,000 donation from the Netherlands. The donations were made through straw men and foundations so the identity of the donors is not not public. The party says the donations were repaid several months ago, and the politician insists she did nothing wrong.

However, she didn’t tell her party until news broke in the media. The revelations may prove damaging given the AfD – and Ms Weidel in particular – have presented themselves as a more honest alternative to the political establishment.

“Unlike the other parties we don’t have big donors,” wrote Ms Weidel last year on Facebook, just before September’s federal election.

But she was reportedly aware at this time of the Swiss and Dutch donations to her constituency party on Lake Constance, near Switzerland.

German law obliges political parties to notify parliament of any single donations above €50,000. Donations from non-EU countries are not permissible unless the money comes from a German citizen.

Ms Weidel, AfD co-leader in the Bundestag, has faced calls to resign but fellow parliamentary leader Alexander Gauland is standing behind her – for now.

The news appears to have cost the Eurosceptic, anti-migration party support: it polled 17 per cent last year but an RTL television poll puts it now on 12 per cent, down one point, while a Bild tabloid poll sees the AfD also down one point to 15.5 per cent.

The donations row – and the proposed party codex – have brought to a head a long-simmering conflict between the party’s moderate and far-right wings.

Björn Höcke, a leading light of the far-right grouping, has dismissed colleagues’ fear of intelligence observation as “political bed-wetting”.