Mountains flattened as Lanzhou builds on the New Silk Road 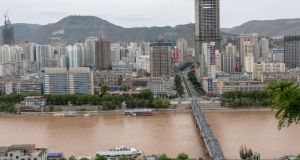 Hundreds of mountains in the dusty province of Gansu have been cut down to make way for Lanzhou New Area, a staging post on the New Silk Road that China hopes will boost trade with Europe, Asia and Africa in President Xi Jinping’s “project of the century”.

Out of the bleak loess landscape emerges this new city with an international airport, high-speed rail station, a free-trade zone, scores of hulking manufacturing facilities, a giant exhibition centre and row after row of high-rise buildings that are expected to house a million people by the end of the next decade.

Underlining the planners’ ambitions for the project, there are even models of the Parthenon and the Sphinx in the Cultural Relics Park, and the government plans to spend 139 billion yuan (€17.75 billion) in the area this year.

“Welcome to the oasis city,” reads a sign, set in shrubbery trimmed to make the shape of a camel, a nod to Lanzhou’s heritage as a key node on the Silk Road, the ancient trade route begun more than 2,000 years ago to transport the delicate fabric to central Asia, the Middle East, Africa and Europe.

Located 70km north of the old city centre of Lanzhou, 700 mountains have been flattened to make an area of usable land that covers 821sq km, the same size as Co Louth.

The area has new importance as part of plans to revive Lanzhou’s role in the modern incarnation of the Silk Road, the Belt and Road Initiative (BRI), which will replace camels and caravans with high-speed railways and container ships.

In his book News from Tartary, the travel writer Peter Fleming describes Lanzhou as “romantic” and the city on the banks of the Yellow River is particularly famous for its spicy beef noodle soup, often produced by the city’s large Hui Muslim minority.

The Yellow River, China’s second-longest, is so-called because of the quantity of sediment that flows into it from the Loess Plateau. It is often called “China’s Sorrow” because of its tendency to flood Gansu, one of China’s poorest provinces.

The west of China, especially Gansu, has not profited as much as the rest of the country from decades of economic growth

However, Lanzhou is remote and surrounded by mountains, and its expansion has long been stymied by its geographical location. For years it had some of the worst pollution in China.

The BRI is central to Xi’s efforts to position himself as a champion of globalisation, as President Donald Trump’s America retreats into isolation.

There are various estimates about the total cost of the vast project, but the investment bank Morgan Stanley reckons it will cost €1.15 trillion by 2027. Already 76 countries are involved in an expanding web of trade routes.

Critics have expressed their wariness about an increasingly assertive China using the New Silk Road to spread its influence.

“A growing number of Chinese experts are arguing that China has prematurely abandoned [former supreme leader] Deng Xiaoping’s ‘hide and bide’ strategy and has overreached, especially in launching the massive BRI project,” said Bonnie Glaser, a senior adviser for Asia and the director of the China Power Project at the Centre for Strategic and International Studies.

Locals hope the BRI will give Lanzhou and the region a lift. The west of China, especially Gansu, has not profited as much as the rest of the country from decades of economic growth.

For academics at Lanzhou University, the BRI is a response to a changing trading environment.

'We hope the Belt and Road will give the region a boost. It’s possible to invest there but difficult to make money'

“The world is changing, especially the economy. How do we face these changes? How do we adapt and develop?” said Ni Guoliang, a professor from the Marxism department of Lanzhou University.

“After the crisis of 2008, we had to see how to recover. We make up 30 per cent of the world economy. We had the responsibility to respond. Our focus is on globalisation, to focus our industries, and to build co-operation with countries along the New Silk Road, to achieve a ‘win-win’ state,” said Ni.

“We have learned a lot from the Ancient Silk Road and we need to apply to the modern economic experience. With the Belt and Road Initiative, Chairman Xi has provided a way to solve the challenges facing China.”

He and his colleague, history professor Yang Jianxing, have just come from meeting a delegation from Ukraine which wanted to explore ways to co-operate on trade.

Yang insists the BRI is not just a Chinese project, but a collaborative one.

“It’s not just a Chinese thing, it’s something that Asian, African and European countries have done together. It is not that we Chinese are forcing people to accept things, it’s about countries answering China’s call. China is becoming more and more powerful, and is a very big country, so people answer the call,” said Yang.

“We are helping other countries to build their economies. It’s a project that we can benefit each other,” Yang said.

An hour away away in Lanzhou New Area, there are groups of workers planting trees, but the land is saline and it’s hard for trees to grow.

On the drive from Lanzhou to the New Area, there are numerous heavy engineering projects going on. As you approach, it’s clear where mountains have been cut away.

Although development of the Lanzhou New Area began before Xi announced the BRI, the drive to make the infrastructure investment programme a success has given fresh impetus to development there.

For many, development is not happening fast enough and some property owners are frustrated that it is taking time for them to get returns.

One middle-aged logistics worker, who asked not to be named, bought an apartment in Lanzhou New Area nearly eight years ago.

“We hope the Belt and Road will give the region a boost. It’s possible to invest there but difficult to make money. There are not that many people there yet. People at the very beginning moved to invest and make money but it turned out to be very slow. At the beginning there were loans from the bank available to invest. Some of the investment has been shut down because of debts,” he said.

Most activity is still focused on the centre of the New Area, and many buildings are still under construction or stand empty. On one side of the road, there is a fair amount of activity, particularly around some trucks selling apples and a few stalls. Older people gather to play cards.

On the other side of the road, in the precinct that includes a huge shopping mall and the enormous, immaculate Railing International Hotel, there is not a soul to be seen.

Although still far from full, it would be a mistake to categorise this area as one of the “ghost cities” that China built a decade ago.

Lanzhou New Area’s proximity to the airport, the high-speed rail link, combined with the massive investment going into the BRI, means this is an investment in future. Even if China has to move mountains to do it.

Tomorrow: Urban and rural families tell Clifford Coonan about how their lives have changed as China continues its economic rise