Shades of the 1789 revolution in France's fuel protests 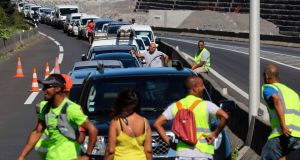 Demonstrators on the French overseas island of La Reunion on Monday demonstrate as part of the gilets jaunes (yellow vest) movement to protest against fuel prices. Photograph: Richard Bouhet/AFP/Getty Images

Protest movements in France invariably carry echoes of class warfare and the 1789 revolution. The yellow-jacketed gilets jaunes, who managed to mobilise 290,000 people across France on Saturday, without an organisation and without leaders, are no exception.

Though their numbers are dwindling, the gilets jaunes continued to block highways, bridges and fuel depots on Monday, with an ever present threat of violence. A 63-year-old female protester was killed when a motorist tried to drive through a barricade in Savoy on Saturday. A 25-year-old man was seriously wounded when he was run over by a lorry at another barricade early on Monday. More than 500 people have been injured.

Speaking in Brussels, where he is on a two-date state visit, President Emmanuel Macron said he would comment “in due course”. The president’s approval rating has fallen to a record low 25 per cent. To the three-quarters of the country who are dissatisfied with him, “in due course” sounded like “let them eat cake”.

To paraphrase George Bernard Shaw, it is impossible for a Frenchman to open his mouth without making another Frenchman hate him. Macron and his acolytes speak like the super-educated, super-cultivated products of the French grandes écoles, which they are. And when Macron tries to talk like “the people”, for instance when he deplored the “crazy amount of dough” wasted to no effect on social spending, it usually backfires.

Macron’s natural constituency are the elite, bobos and ethnic minorities. Unfortunately for him, the petits blancs are probably a majority

A few days ago, a senior adviser to Macron briefed journalists on the “conjunctural” versus “substantive” causes of the fuel protests. He ridiculed Jacline Mouraud, the hypnotist and spiritual medium who criticised Macron in a video that went viral. Listening to the adviser, I couldn’t help imagining him as a powdered marquis being led to the guillotine while Mouraud cheered as a revolutionary tricoteuse.

Over a glass of Beaujolais, journalist and author Hervé Algalarrondo told me he thought Macron might not recover from his present unpopularity: “He doesn’t like lower class people. He’s contemptuous of them. Look at the things he says.”

To anyone who has been horrified by Donald Trump’s insults to women, ethnic minorities, journalists and Europeans, Macron’s blunders seem innocuous. Not to the thin-skinned French. Algalarrondo recalled the president’s remark at the launch of a “startup incubator” in a former railway station in June 2017: “A train station is a place where you come across people who succeed and people who are nothing,” Macron said.

Surely he meant the jobless, or people who have nothing, I replied. “No,” Algalarrondo insisted. “Macron knows the weight of words. He said ‘People who are nothing’ because that’s what he thinks.”

Perhaps Macron invited accusations of arrogance when he said he wanted his to be a “Jupiterian” presidency. I recently heard him criticised for wearing a cutaway tailcoat to a state dinner in Denmark, because it looked too expensive. Before he resigned, the interior minister Gérard Collomb said Macron and his government “perhaps lacked humility... In the palaces of the Republic, one loses the ability to listen to the population.”

It doesn’t help that Macron’s entourage comprises young men who resemble him, though they lack his charisma. “One should never surround oneself with clones,” says the political scientist Pascal Perrineau.

American youths use the slang verb “diss” to mean “disrespect”. Arabs who revolted against their rulers accused them of hogra, meaning disdain or contempt. Poor Macron is widely and perhaps unjustly pilloried for the same offence.

Macron has appointed several north African Arabs to high positions. In the banlieues and French West Indies, he has established a real rapport with Black people. All of which further enrages the petits blancs who have been pushed out of big cities by “bourgeois bohemian” bobos, and out of the banlieues by migrants and their descendents.

“Macron regularly shows empathy towards Blacks and Arabs,” says Algalarrondo. “But not towards the petits blancs. They are his terra incognita, his Bermuda Triangle. And the gilets jaunes are petits blancs. They’re the same social class who vote for Trump in the US. Macron’s natural constituency are the elite, bobos and ethnic minorities. Unfortunately for him, the petits blancs are probably a majority.”

The crisis also pits these two Frances against each other. Bobo ecologists were dismayed by the resignation of the previous environment minister Nicolas Hulot. They live in city centres and ride bicycles, and they don’t want Macron to cave on fuel prices. They look down on the gilets jaunes for creating chaos, and for refusing to sacrifice their polluting cars in the fight against global warming.