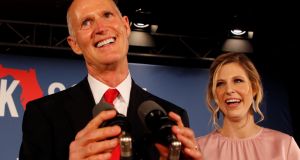 Republicans look set to widen their majority in the US Senate after two Florida recounts – one by machine, one manual – confirmed that the state’s outgoing governor, Rick Scott, had defeated Democratic senator Bill Nelson to take one of the last outstanding seats in the upper chamber of Congress.

Until Sunday, Mr Nelson and his lawyer had repeatedly stated that the Democrat, an astronaut who has served in the Senate since 2000, had a path to holding on to the seat, despite trailing Mr Scott by some thousands of votes.

The declaration of the final manual recount put the margin at 10,033 votes out of 8.19 million cast statewide. Mr Scott took 50.05 per cent, compared with 49.93 per cent for Mr Nelson, according to election officials.

Mr Nelson released a video statement on Sunday conceding defeat. “I was not victorious in this race but I still wish to strongly reaffirm the cause for which we fought: a public office is a public trust,” he said.

The recounts extended the drama of this month’s midterm elections and summoned the ghosts of the 2000 election when a Florida recount held up the nation’s presidential result.

Mr Nelson’s defeat marks the end of the major postelection vote counting, 12 days after polling. On Saturday, Andrew Gillum, the Democratic candidate to succeed Mr Scott as Florida governor, conceded to Republican Ron DeSantis after a machine recount found him trailing by more than 34,000 votes.

However, the Senate race in Mississippi will be decided in a run-off election on November 27th, since Republican incumbent Cindy Hyde-Smith failed to secure a majority against Democratic challenger Mike Espy.

Republicans are favoured to win the Mississippi race, which would leave them with a 53-47 majority in the Senate.

In the lower House of Representatives, Democrats won enough seats to wrestle control from the Republicans, although six results are still outstanding.

In Florida, Mr Nelson and his lawyers had pinned much of their hopes for an 11th-hour victory on Broward County, which had raised suspicion about the accuracy of the first count because nearly 30,000 voters appeared to have either not voted in the Senate race or voted for multiple candidates.

The manual recount showed those 30,000 had indeed not a cast a ballot for a single candidate. – Copyright The Financial Times Limited 2018