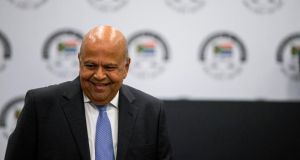 Pravin Gordhan, South African minister of public Enterprise, at the hearings of the judicial commission of inquiry into allegations of state capture, corruption and fraud in the public sector including organs of state on November 19th in Johannesburg Photograph: Wikus de Wet/AFP/Getty

South Africa has been significantly damaged by high-level corruption in government and the public sector in recent years, former finance minister Pravin Gordhan has told an inquiry investigating the matter.

Testifying at the Commission of Inquiry into state capture, corruption and fraud in the public sector on Monday, Mr Gordhan, who was reappointed finance minister by former president Jacob Zuma in 2015, said the scale of the corruption started to become evident in 2014.

Mr Gordhan said that events at the National Treasury and the manner in which a proposed nuclear deal with Russia was dealt with by officials suggested an intricate network of corruption in place in government.

“There was more to it than the individual acts of corruption . . . there was a wider set of schemes,” he said.

The commission of inquiry has a focus on whether South Africa’s controversial Gupta business family and their associates illegally influenced political decisions taken by Mr Zuma and other government officials to their financial benefit.

Mr Zuma, who was removed as South Africa’s president by the African National Congress party earlier this year over corruption allegations, has denied any wrongdoing. Businessmen Athol, Ajay and Rajesh Gupta, who fled the country shortly after Mr Zuma’s sacking, also claim they are innocent.

Mr Gordhan has been widely lauded for playing a crucial role in trying to protect the National Treasury from corruption until he was fired by Mr Zuma in March 2017.

Monday’s testimony was the first time he has officially given details of his experiences as finance minister between 2015 and his dismissal.

When South Africa’s current president Cyril Ramaphosa took office in February he reappointed Mr Gordhan to his cabinet as minister for public enterprise, where he has been tasked with rooting out corruption at state-run enterprises, among other things.

Mr Gordhan told the inquiry that during his second term as finance minister under Mr Zuma, the president expressed an “extraordinary interest” in the appointment of a new South African Revenue Service (Sars) commissioner.

He went on to describe how Mr Zuma did not want to follow the correct appointment protocols and when he tried to intervene the former president told Mr Gordhan he was “interfering”.

Alleged corrupt activities at Sars since Tom Moyane was appointed its commissioner by Mr Zuma in 2014 have become central to the inquiry’s investigation.

He urged the inquiry chairman, deputy chief justice Raymond Zondo, to look into the departments of energy, mineral resources, communications, co-operative governance and traditional affairs about changes that have occurred there and why, and then to “join the dots”.