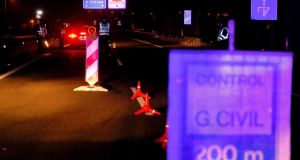 Civil Guard officers at a checkpoint in Galcia after regional authorities introduced movement restrictions in the A Mariña coastal area in response to a rise in coronavirus cases. Photograph: Eliseo Trigo/EPA

Authorities in Spain sought to provide reassurances over the spread of Covid-19 after the reimposition of restrictions at opposite sides of the country to contain fresh infections cast a shadow on the tourist season.

Regional officials restricted mobility over the weekend for about 200,000 people in the county of Segrià in Catalonia, in the north-east, and some 70,000 in A Mariña county in Galicia, in the north-west, following outbreaks in both areas. Several counties in the province of Huesca also reimposed some restrictions last month.

Such actions highlight the challenges faced by Spain, previously one of the countries worst hit by the pandemic, as it tries to return to normal economic activity and salvage its vital tourist industry without pushing up infection rates two weeks after ending its nationwide lockdown.

The local restrictions echo, albeit in a milder form, measures taken in the English city of Leicester where UK authorities have advised residents to stay at home because of a resurgence in cases. They are being watched closely by other European countries such as France, Italy and Greece as flocks of tourists descend on beaches and other summer destinations.

“The situation in Catalonia is under control,” Bernat Solé, the official responsible for foreign affairs in the Catalan regional government tsaid on Monday.

He emphasised that the Segrià lockdown affected only 2.5 per cent of the region’s population. “This is a lockdown in a very specific area that is very small compared to Catalonia as a whole,” he said.

Jesús Vázquez Almuiña, Galicia’s top health official, said on Sunday that many of the people infected in A Mariña were young and mostly asymptomatic. “As a result, in general they can overcome the disease without major problems,” he added. But he warned that without symptoms it was “very difficult to control the disease”.

Spain’s health minister, Salvador Illa, predicted in an interview last month that the country would have to use localised “surgical” measures to respond to new clusters of cases.

“This shows we were right when we said that the virus was still there and that we have to be very prudent,” said Faustino Blanco, a senior health ministry official, on Monday.

He underlined that the extraordinary legal order that underlined the nationwide lockdown had now lapsed: “We are monitoring the situation actively in the ministry, but it is the regions that are taking the decisions ... This is a containment situation.”

The outbreaks in Segrià and A Mariña are among about 40 or so clusters – defined as when there are three or more connected cases – with which Spain is currently dealing.

The restrictions, which are set to be in place for two weeks for Segrià and five days for A Mariña, forbid non-essential travel in and out of the counties but fall short of reimposing the full-fledged lockdown Spain endured from mid-March. In both counties small groups of up to 10 can continue to meet, bars remain open and people are not confined to their homes.

Catalonia is one of the regions of Spain that has suffered most from the pandemic and has been criticised for alleged deficiencies with its contact tracing system. The restrictions in A Mariña come just a week before regional Galician elections on July 12th.

Spain’s methodology for counting coronavirus cases has been contentious. But in the two weeks since the end of the lockdown there has been a marked rise in one of Spanish officials’ preferred measures – the number of diagnosed cases in which symptoms began in the previous 14 days.

However, the number of coronavirus cases is down from the peak of around 9,000 a day in late March, despite an improvement in testing. By contrast with the worst days of the pandemic, a big proportion of the total of people testing positive is now made up of people without any symptoms.

Over the past week more than 500 people have tested positive in Segrià, a two-hour drive from Barcelona, while there are more than 100 active cases in A Mariña, near the north-west tip of Spain. However, care homes – which represented a huge proportion of the deaths during the worst of the outbreak – have so far been barely affected in Segrià and completely spared in A Mariña. – Copyright The Financial Times Limited 2020