Coverage of Kate is brimful of positivity, stories about Meghan, holed up in LA, less so 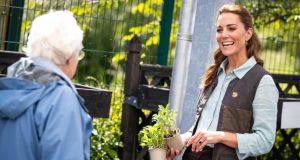 The Duchess of Cambridge talks with a member of the public as she shops for plants and herbs at Fakenham garden centre in Norfolk. Photograph: Aaron Chown/PA.

Whether plunging her hands into compost for a hospice garden or virtual bingo-calling at a care home, Britain has seen a lot of Kate Middleton, the duchess of Cambridge, recently.

The dramatic Megxit departure of Meghan Markle, the duchess of Sussex, and a national crisis during which British royals are traditionally expected to apply PR balm, has seen Kate become ubiquitous, adorning newspapers, magazines and TV screens, all attesting that she has enjoyed a good lockdown.

“Now, that’s what you call mucking in!” ran one exultant headline, as “The duchess gets her fingers and her dress covered in soil” for the worthy cause of a children’s hospice. “Kate’s little angel,” ran another, on her encouraging five-year-old Princess Charlotte to help with food-parcel deliveries.

Kate has popped up on the maternity bedside screen of an “astonished” new mum for “a cheery post-natal chat” while also, readers are reminded, “juggling” homeschooling, with “online appearances in support of her charities”.

“With Meghan gone, the only person who really could provide the glamour factor is Kate,” the historian Sarah Gristwood, author of Elizabeth: The Queen and the Crown, told People, the US magazine, which featured her on its latest cover.

Her stock, it seems, is high on both sides of the pond.

But it’s hard to ignore the contrast in tone of the coverage of the sisters-in-law. Headlines about Kate are brimful of positivity. Stories on Meghan, holed up in Los Angeles, less so.

Problems with registering the Sussexes’ Archewell not-for-profit foundation, the travails of her legal action against the Mail on Sunday and Mail Online, a high-octane spat between her friend Jessica Mulroney and a Canadian lifestyle blogger, and the Sussexes repayment of the £2.4 million, or €2.65 million, from public funds for the refurbishment of Frogmore Cottage, their Windsor base, have made for chewier reading.

The timing of the Sussexes’ departure for LA ahead of lockdown has stymied their plans to fully launch life away from the Buckingham Palace goldfish bowl. Britain has seen less of Meghan, though a powerful speech on the death of George Floyd to graduates at her alma mater, Immaculate Heart High School, resonated.

But royal observers believe Kate’s present high profile is not solely down to Meghan’s absence.

Simon Perry, People magazine’ s UK-based royal correspondent, believes lockdown has played to Kate’s strengths.“Funnily enough, those interested are seeing more of Kate through these online video calls and quite long TV interviews. You could argue the public has seen more of her than they would on ordinary engagements, when they might get a fleeting look, or a sentence or two,” he says.

“Americans love the royals, and our readers continue to be very interested in Kate. She was on our cover last week, where we talked about the pressures she and William are under because there are a lot of expectations on them.”

I think people feel more connected to her than ever in some ways, because they are hearing more from her directly

Others believe the future princess of Wales and Queen Catherine has grown into her role. “She’s had a good lockdown. She’s come out of her shell a bit more. She is still not the best public speaker, but she is definitely getting better, and a bit braver during this crisis about wanting to say things,” says one.

She has been Hello! magazine’s cover for the last two editions. Its royal editor, Emily Nash, says: “ I think people feel more connected to her than ever in some ways, because they are hearing more from her directly, whether it’s on video calls or interviews, and she’s opening up more on a personal level.”

“We’re hearing about the highs and lows of homeschooling, how she’s missing her family, she’s struggling to get her two-year-old to behave on FaceTime calls to family – it’s all very relatable stuff.

“She has definitely grown in confidence and feels able to talk about subjects like early-years development and mental health because she has done all the research, and really knows what she’s talking about.

“There is still the fascination in her wardrobe, of course, but I think people are also paying more attention to what she is saying and doing and the issues she is highlighting.”

Despite the thousands of kilometres now separating them, the so-called wardrobe war remains a rich seam mined by tabloids keen to perpetuate rumours of rivalry between the two duchesses.

Here again Kate has been pronounced the queen of lockdown fashion. The UK website lovethesales.com recently declared that outfits worn by Kate had increased fashion searches by 86 per cent since March. Meghan’s, by contrast, generated a 35 per cent increase.

And 14 of the 16 outfits Kate has worn have sold out, compared with only one of Meghan’s six. It may seem uncontroversial as Kate, propelled by palace and government apparatus, has been doing her day job, while Meghan, now without such support, has been seen far less in public.

But nothing is too trivial to elicit comparison. “I think Meghan’s new-found distance from the royal family, combined with her less glamorous apparel in lockdown, has contributed to a drop in fans’ searches for her clothing,” the stylist Jessie Stein said in one article.

“Kate has certainly shown a more premium look in lockdown, and is really leading from the front with her continued charity work online.” – Guardian

Covid-19: The fallout for families has been immeasurable
8

‘I come from an explicit, brash, rude culture. Ireland is a lot more implicit’
9