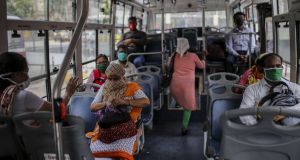 India has overtaken Russia with the world’s third-highest number of novel coronavirus cases, at nearly 700,000, according to the latest data, as the pandemic shows no sign of slowing globally.

Health ministry data on Monday showed more than 23,000 new cases reported in the previous 24 hours, down slightly from Sunday’s record increase of almost 25,000.

There have been almost 20,000 deaths in India since the first case was detected there in January.

India is now the world’s third worst-affected country, behind only the United States and Brazil.

It has seen eight times the number of cases as China, that has a similar-sized population and is where the virus originated late last year.

Officials said they had reversed a decision to reopen the Taj Mahal, India’s most famous tourist attraction, in the city of Agra, 200km southeast of New Delhi, on Monday, following a spate of new cases in the area.

Australian officials are closing the border between Australia’s two most populous states, New South Wales and Victoria, as they scramble to contain an outbreak in Melbourne, marking the first time the border will be shut in 100 years.

Meanwhile, Tokyo found 102 new coronavirus cases on Monday, NHK reported, marking the fifth consecutive day of more than 100 infections as the city tries to fend off an outbreak without resorting to widespread business shutdowns.

The latest figure comes as the city’s governor Yuriko Koike was elected to a second term in a landslide victory. After declaring her win on Sunday, she said now is a crucial time to prepare for a second wave as cases jump to the highest levels in two months.

Israel’s health minister, Yuli Edelstein, said the country was facing a second wave of the virus after 977 new cases were reported on Sunday, the highest daily number so far.

The prime minister, Binyamin Netanyahu, said at a cabinet meeting on Sunday: “We are at the height of a new corona offensive. This is a very strong outbreak that is growing and spreading in the world and also here.” – Agencies