Ghana offering African Americans the chance to move to Africa 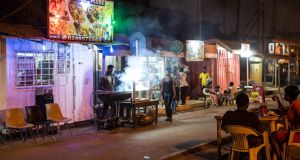 Ghana is offering African Americans the chance to move to Africa, with government officials telling them to “come home” and leave a place where they are not wanted.

It was aimed at getting people with Ghanaian or African roots to come back and spend money through investment or tourism, and highlighted trips by celebrities including actor Idris Elba, model Naomi Campbell and musician Cardi B.

The death of African-American man George Floyd in police custody on May 25th, which led to protests across the US and much of the world, has prompted Ghanaian politicians to renew their call-outs to people of African descent.

In a statement after Floyd’s death, Ghanaian president Nana Akufo-Addo said “it cannot be right that in the 21st century, the USA, this great bastion of democracy, continues to grapple with the problem of systematic racism”.

In June, followinga wreath-laying ceremony in the capital city, Accra, in honour of Floyd, minister of tourism, Barbara Oteng-Gyasi, said: “We continue to open our arms and invite all our brothers and sisters home.

“We have our arms wide open, ready to welcome you home. Please take advantage, come home, build a life in Ghana. You do not have to stay where you are not wanted forever, you have a choice and Africa is waiting for you,” she said.

The Ghanaian government has now earmarked 200 hectares (500 acres) of land, which could provide space be enough for 1,500 families, according to a report in the Washington Post.

“We want to remind our kin over there that there is a place you can escape to,” Ghana Tourism Authority chief executive Akwasi Agyeman told the newspaper.

American comedian and online influencer Jay Versace said in a tweet last month that he knows a large amount of people who are moving to Ghana, or have already gone.

“This is crazy, I guess we [are] really leaving,” he said.

Ghana became independent from Britain in 1957. Of its roughly 30 million population, more than 3,000 are African-Americans or people of Caribbean descent, according to 2014 estimates. Last November, 126 African-Americans and Afro-Caribbeans became citizens in a ceremony held as part of the ‘“Year of Return’”.

However, some Ghanaian activists have criticised the government, saying police brutality is an issue in Ghana too. On June 6th, a Black Lives Matter demonstration in Accra was broken up by police and its organiser, Ernesto Yeboah, was arrested.