Amid Covid-19 and BLM mishandling, swing state may be lost to incumbent president 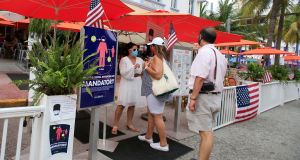 A couple enters the Oceans Ten restaurant in the South Beach area of Miami Beach, Florida. To prevent the spread of Covid-19, beaches are closed from July 3rd-7th. Photograph: Cliff Hawkins/Getty

Republicans are warning the outlook is “grim” for Donald Trump in Florida, a closely watched battleground state that is seen as pivotal for the US president’s re-election prospects in November.

With four months to go until election day, Trump’s poll numbers have dropped sharply across the country, with many Americans disapproving of his handling of both the coronavirus pandemic and widespread civil unrest following the killing of George Floyd. Most national polls show the president trailing Joe Biden, the presumptive Democratic nominee, by double digits.

In Florida, the margins are closer. According to the Real Clear Politics average, Biden, the former vice-president, leads Trump by five points.

Members of the president’s own party are warning that a recent spike in coronavirus cases, as well as the threat of a prolonged shutdown, could hurt him at the ballot box in November. Florida’s department of health reported a record 11,458 new infections on Saturday alone.

“He is in a much weaker political position than he was in at the beginning of the crisis,” said Carlos Curbelo, a former Republican congressman from south Florida who lost his seat in 2018 to Democrat Debbie Mucarsel-Powell. “I think there are a lot of twists and turns left, but today, things look grim for the president.”

Ford O’Connell, a Republican strategist from Naples, Florida, who is close to the Trump campaign, said the state’s “trend lines” were “not currently going in [Trump’s] favour”.

“Obviously the triple whammy of the virus, the pandemic-induced weak economy and the social unrest have taken a toll on President Trump’s poll numbers,” he said.

Florida avoided a full-blown crisis when coronavirus first started spreading across the US. But the state – one of the first to reopen non-essential businesses, notably indoor bars and restaurants catering to beach-going tourists – has seen its number of Covid-19 cases jump as of late.

Ron DeSantis, the state’s Republican governor, reversed reopening plans in many parts of the state and closed beaches for the July 4th weekend in an effort to slow the spread of the virus. Mike Pence, the US vice-president, met DeSantis in Florida on Thursday to discuss the scale of the health crisis.

With more than 21 million residents, Florida is America’s biggest swing state by population. In 2016, Trump won the state’s 29 electoral college votes by a 1.2-point margin over Hillary Clinton.

Florida is arguably America’s most politically divided state – most recent statewide elections have been decided by a margin of less than a percentage point. It is also one of the most racially and ethnically diverse states, with large numbers of black and Latino voters, notably exiles from Cuba and Venezuela who are drawn to the Republican party’s anti-socialism message. And while it is known for having the largest share of retirees in the country, it is also home to big groups of young voters.

Perhaps most importantly for Trump, the victor in Florida has gone on to win the White House in 13 out of the past 14 presidential contests.

“The reason why it is the most important swing state is because if Trump loses it, it’s over,” O’Connell said. “If Trump wins it, he is fighting.”

Trump is reportedly holding a fundraiser in person in Hillsboro Beach, Florida, this week. Guests will be tested for Covid-19 before attending. Tickets for the event are $580,600 per couple, according to NBC News.

By contrast, Biden has had “virtual” fundraising events since the start of the pandemic, and only recently began holding small, in-person campaign events.

One Trump supporter noted the president’s campaign was “aware” that Biden had been “upping his fundraising game”. Biden and the Democratic National Committee raised more than Trump and the RNC in both May and June.

Non-partisan analysts cautioned the polls in Florida were often unreliable, and the president still had considerable time to shore up his base in the state that he now calls home, especially if the number of Covid-19 cases subsided and the outbreak remained limited to mostly younger people, who were likely to make a full recovery.

Susan MacManus, a retired political science professor from the University of South Florida, described the state as a “toss-up”. She said surveys there had historically been inaccurate because many Trump supporters gave “socially desirable answers” instead of their actual views, or would not talk to pollsters at all.

Armando Ibarra, president of Miami Young Republicans and a supporter of Trump, agreed: “There are strong public disincentives for people to share openly how they feel. It is a very polarised environment.”

Many Trump supporters in the state say they are confident the president will cobble together a coalition of right-leaning pensioners, who are more inclined to endorse his “law and order” rhetoric in response to Black Lives Matter protests, and Latinos who are buoyed by his tough stance on Cuba and Venezuela. Some argue the president could expand his support among Latino voters from other Latin-American countries, especially if the Democratic party fails to make concerted outreach efforts.

“Most conservatives genuinely believe that the president can keep it together, or bring it back together, and win Florida,” said Jorge Luis Lopez, a Republican lobbyist in Miami.

“There is certainly a minefield that Trump has to navigate. But the guy has nine lives,” said Brad Coker, a veteran non-partisan Florida pollster and managing director at Mason-Dixon Polling & Strategy in Jacksonville. “I don’t know how many times he has been counted out before.” – Copyright The Financial Times Limited 2020