Jeff Sessions hits back at Trump after Fox News attack

US Wrap: Attorney general says department will not bow to politics over Cohen plea deal

US President Donald Trump said on Wednesday (August 22) he found out only after the fact about payments his then-lawyer Michael Cohen made to silence two women who said they had had affairs with Trump, adding that the money came from him. Video Fox 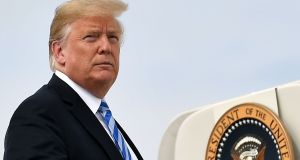 Trump said in an interview the US economy would collapse if he were impeached. Photograph: Mandel Ngan/AFP 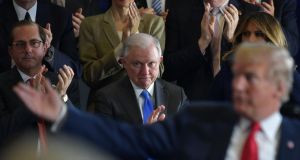 Jeff Sessions, the US attorney general, has pushed back at criticism from his boss, US president Donald Trump, saying the US department of justice will not be “improperly influenced by political considerations”.

The remark came as a plea deal struck by the president’s one-time personal attorney has raised questions about what legal fallout the Trump administration could face – and how Mr Trump might respond.

The statement from Mr Sessions came after Mr Trump told Fox News in an earlier interview on Thursday that he had “put in an attorney-general that never took control of the justice department” and reiterated prior criticism of Mr Sessions’ decision to recuse himself from special counsel Robert Mueller’s investigation into alleged Russian interference in the 2016 election.

Mr Trump has made no secret of his unhappiness with Mr Sessions, having taken to Twitter in the past to call the attorney-general “beleaguered” and describing some of his actions as “disgraceful”.

The president’s interview came on the heels of a double whammy from the justice department earlier this week, in which he saw former campaign manager Paul Manafort convicted of numerous federal charges, including bank and tax fraud, as well as the guilty plea from former fixer and attorney Michael Cohen, whose statements to prosecutors appeared to implicate the president in an illegal scheme to pay off two women alleging affairs during the presidential campaign.

A large number of counts, ten, could not even be decided in the Paul Manafort case. Witch Hunt!

Republican senator Lindsey Graham, who is both close to Mr Trump and a defender of Mr Sessions, said he believed Mr Trump would appoint a new attorney general but should wait until after the November congressional elections.

“The idea of having a new attorney general in the first term of president Trump’s administration I think is very likely,” Mr Graham said.

Mr Trump told Fox he respected Manafort for work he had done for prominent Republican politicians, adding that “some of the charges they threw against him, every consultant, every lobbyist in Washington probably does”.

The Fox News reporter who interviewed Mr Trump said on Wednesday that Mr Trump told her he would consider pardoning Manafort. But in the interview that aired on Thursday, Mr Trump never said he was considering the pardon.

Asked if he directed Cohen to make the payments, Mr Trump said only that Cohen made both deals. He attacked Cohen for agreeing to a plea deal with prosecutors that made Mr Trump look bad. “It’s called flipping and it almost ought to be illegal,” he said.

Mr Trump was asked whether he thought Democrats would move to impeach him if they won control of the House of Representatives in November. “I don’t know how you would impeach somebody who’s done a great job,” he said. “If I got impeached, I think the market would crash.”

Separately, it was reported on Thursday that David Pecker, chief executive of the company that publishes the National Enquirer, the tabloid magazine involved in hush money deals to women ahead of the 2016 election, was granted immunity by federal prosecutors as part of the Cohen investigation.

Mr Pecker met with prosecutors to describe the involvement of Cohen and Mr Trump in pay-offs to women who alleged affairs in the past with the president, the Wall Street Journal reported .

Mr Pecker, a longtime friend of Mr Trump, was initially subpoenaed by federal investigators four months ago. The Enquirer, the often lurid tabloid that reportedly played a key role in shielding Mr Trump from negative stories , has become deeply embroiled in the legal storm engulfing the White House.

Experts predicted on Thursday that it could have its press protections stripped away.

1 Trump says Covid-19 will disappear after US reports record increase
2 Who are the new junior ministers? All their profiles are here
3 Open Ireland as soon as possible - Tourism chief warns of 'catastrophic' impact of pandemic
4 World, look away now – these are dark days for the United States
5 Bobby Storey: The IRA's planner and enforcer who stayed in the shadows
Real news has value SUBSCRIBE