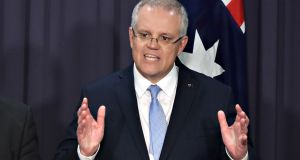 Before becoming an MP in 2007, Australia’s new prime minister Scott Morrison was head of Tourism Australia and behind the infamous “Where the bloody hell are you?” campaign in 2006 which was banned from British television because the slogan was deemed too risqué.

But, waking up to news that Australia now has its fifth prime minister in five years, the rest of the world is more likely to be saying “Who the hell are you?”

In his maiden speech to parliament, Morrison quoted an unusual source in ruminating about Africa. “The African tragedy is driven by war, poverty, disease, famine, corruption, injustice and an evil that is robbing generations of Africans, our fellow human beings, of their future. Paul Hewson, better known as Bono, said: ‘There is a continent, Africa, being consumed by flames. When the history books are written, our age will be remembered for . . . what we did, or did not do to put the fire out.’”

Morrison is an evangelical Christian who lists “church” as one of his interests in his Who’s Who profile. That church is the enormous Horizon Pentecostal in Cronulla, an area that made worldwide headlines for anti-Muslim riots in December 2005.

In 2011, he told ABC radio he saw no conflict between his religious beliefs and political positions, saying the Bible is “not a policy handbook”.

As minister for immigration when the Liberal-National coalition won power in 2013, Morrison oversaw a hardline immigration policy known as operation sovereign borders.

In 2014, video footage emerged of Morrison telling asylum seekers and refugees detained in Australia’s offshore detention centres in Papua New Guinea and Nauru that they must return to the countries they fled from or spend a “very, very long time” in detention. Asked how this squared with Christianity, he said “how I reconcile with my faith is, frankly, a matter for me”.

In 2015, Morrison acted as kingmaker in helping Malcolm Turnbull depose Tony Abbott as Liberal Party leader and prime minister. His reward was to be made treasurer. His last budget, in May, announced cuts to personal tax and painted a rosy picture of Australia’s economic future. Economists said too rosy, but there is some proof in the pudding – GDP growth is 3.1 per cent and unemployment is 5.4 per cent.

With an election due by May, we will soon know if Morrison has staying power or is just another in a long line of short-lived Australian prime ministers.