Spanish and Catalan leaders to meet after months of rancour 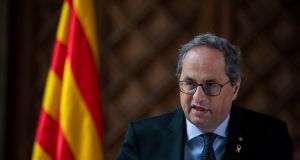 The Catalan parliament has agreed to appeal against the decision to strip Catalan president Quim Torra of his seat. Photograph: Emilio Morenatti/AP Photo

The Spanish and Catalan leaders are due to meet on Thursday in a highly anticipated encounter that could open a new phase of engagement between Madrid and the northeastern region following months of hostility.

Socialist prime minister Pedro Sánchez will travel to Barcelona where he will meet Catalan president Quim Torra in the regional government building. The last time the two met formally was at the end of 2018.

That encounter led to a document aimed at resolving the ongoing territorial crisis caused by the Catalan government’s ambitions of breaking away from Spain. But the agreement was short-lived, with Catalan nationalists triggering the collapse of Mr Sánchez’s government by withdrawing their support for his budget in parliament.

Relations between the Socialist leader and Mr Torra then hit a low after nine independence leaders were jailed for sedition in October, triggering mass protests, some of them violent.

But since then, Mr Sánchez has formed a new coalition government with the leftist Podemos party and vowed to seek a solution to the Catalan conflict. After the pro-independence Catalan Republican Left (ERC) helped him form the new administration in an investiture vote, he agreed to open a series of negotiations with the region’s government in the coming months. Thursday’s summit is seen as the prelude to those talks, which still do not have a starting date.

Spanish government spokeswoman María Jesús Montero has admitted the two sides are “diametrically opposed” regarding how they view the territorial issue and she played down the likelihood of an immediate breakthrough.

“I can guarantee this won’t be easy and I can say that it’s a complex issue and this government doesn’t expect short-term results because it’s going to be very difficult,” she said. “But what [the government] does hope is that we can establish a path that allows us to keep moving, keep going forward.”

However, the Sánchez government’s conciliatory approach is not shared by the political opposition in Madrid.

The conservative Popular Party (PP) and far-right Vox have accused Mr Sánchez of risking Spain’s territorial unity due to his determination to appease ERC and thus remain in power.

On Wednesday the PP presented a lawsuit against Mr Torra, accusing him of unlawfully holding public office. Last week the Catalan leader was stripped of his seat in the regional parliament after he had been found guilty of disobeying a court that last year ordered him to remove pro-independence propaganda from his government’s building during an election campaign.

“We formally request that Pedro Sánchez cancel his meeting with a person who should not hold the title of president of the Catalan government,” said PP leader Pablo Casado.

On Wednesday the Catalan parliament agreed to appeal against the decision to strip Mr Torra of his seat. However, his legal problems have deepened existing divisions between his own Together for Catalonia party and its coalition partner, ERC. Last week Mr Torra responded to the political chaos by announcing that he would call a Catalan election later this year.

This uncertainty briefly cast doubt on Thursday’s summit and had threatened to derail the upcoming talks between the two governments. However, ERC, which of the two governing Catalan parties has been the more enthusiastic regarding the negotiations, has issued a warning to Mr Sánchez.

“If the negotiations do not happen, [the Spanish government] cannot count on us ever again,” said ERC spokeswoman Marta Vilalta, adding that she hopes a date for the beginning of the negotiations will come out of Thursday’s meeting.

“We want this to progress and not, as has been the case previously, have the door slammed in our face.”